Stephen A. Smith Goes Off On ‘Delusional’ Kyrie Irving, Claims He Conducted His Own Practices Last Season 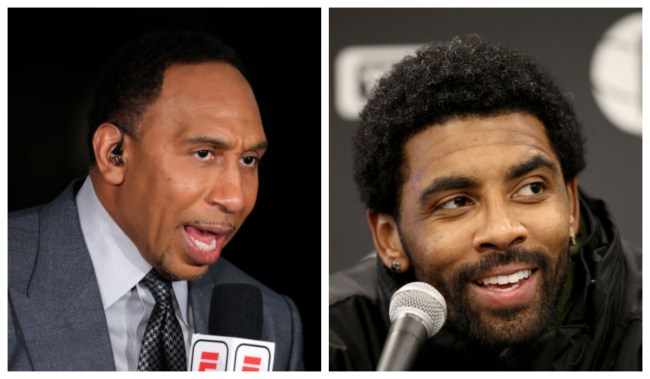 A report from The Athletic’s Shams Charania surfaced on Monday that suggests Kyrie Irving and the Brooklyn Nets are at an “impasse” and the Nets could look to trade him this offseason or he could opt-out to test the market.

This, of course, is a gift for Stephen A. Smith as he’s been incredibly vocal about Irving and teed off on him at least a dozen times over the past year.

Back in September Smith shouted, literally, for the Nets to trade Irving when he refused to get the vaccine forcing him to miss the majority of Brooklyn’s home games this past season.

Smith then famously said that it would “be a disaster for the game of basketball” if Irving and the Nets won the NBA title this year. He then contradicted himself shortly thereafter calling out New York City for its mandate, but hey, if you have to fill hours of television every weekday you’re going to backtrack on things every so often.

With Irving back in the news on Monday, Smith is back to bashing the seven-time All-Star.

“An impasse? An impasse? This is a guy that missed 127 games over the last three seasons and he thinks he deserves a four-year extension fully loaded,” Smith asked during ‘First Take.’

“I mean, what nerve, what gall. Listen, talk about delusional, that’s this dude, that’s Kyrie Irving.”

Stephen A Smith on Kyrie and Brooklyn’s “impasse” pic.twitter.com/FXZRTgCRRO

Smith calling out Irving over him and the Nets reportedly at an impasse wasn’t enough, however.

Later in the show, out of nowhere, Smith claims that he’s been told that Irving conducted his own practices last season. According to Smith, Irving would go grab five guys after practice and hold his own, which is extremely disrespectful in Smith’s opinion.

"When it comes to a lengthy contract … it's not just about your abilities. It's about your availability and your willingness to be available to capitulate and participate in the best interest of TEAM."

This isn’t the beginning of the Irving-Smith feud, and it certainly isn’t the end, either. There will be plenty more to come from both sides over the coming months, that’s for sure.