Stephen A. Smith Wants To Double-Down On ‘First Take’ Chaos, Looking To Get Mike Francesa On The Show 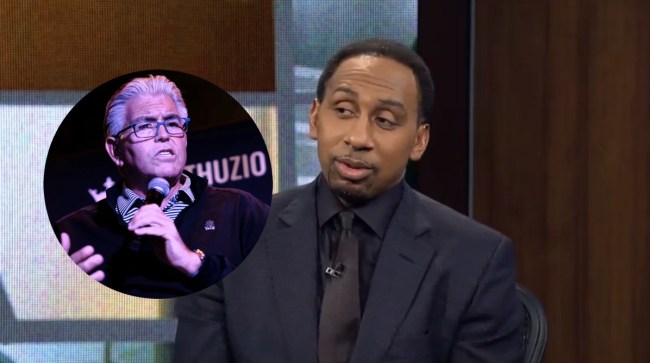 Clearly satisfied with how the appearances of Chris “Mad Dog” Russo have been going so fa this year, First Take host and mastermind Stephen A. Smith reportedly wants to double down on the NYC sports talk radio madness by getting the one and only Mike Francesa to join the show.

During the Wednesday episode of First Take this week, the topic of Francesa came up and Smith became giddy over the prospect of having the iconic New York City sports pope on the program.

Stephen A. Smith would love to have Mike Francesa on First Take

“You are one of the pioneers if not THE pioneer with Mike Francesa. Who, by the way, I got to get him on this show one day too, with you. You understand what I’m saying? I mean it would be my honor to have Mike Francesa too.”

Stephen A. Smith wants to get Mike Francesa on First Take 👀 pic.twitter.com/aFkoqbh6e0

Now 68 years old, Francesa — having most recently hosted an hourly daytime slot for WFAN — retired (for the third time) back in 2020.

Adding Francesa would be the latest tweak to First Take in recent years, as the show replaced former co-host Max Kellerman back in 2021 and has since been using a rotating set of co-hosts alongside Stephen A. Smith.

RELATED: Stephen A. Smith Returned To ‘First Take’ In A Ridiculous Orange Jacket And Got Roasted So Hard