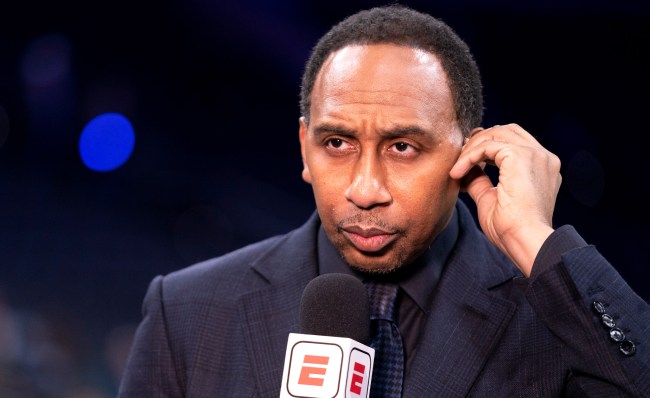 Despite the fact that the Brooklyn Nets are 10-5 on the year and sitting atop the Atlantic Division, Stephen A. Smith has seen enough. He thinks this Nets team is doomed, that Kevin Durant should’ve signed elsewhere, and that Kyrie Irving should be out of a job.

Smith is paid to overreact on ESPN every day, but his tantrum about the Nets on Wednesday morning following their home loss to the Warriors may just be his finest work of the year.

Stephen A., along with plenty of other media members, has been very clear that he doesn’t like the fact that Irving is sitting out the season due to his own vaccine hesitancy and New York protocols. Smith took things further on Wednesday, however, saying that Irving has betrayed Brooklyn and KD.

“I actually hope Kyrie Irving gets cut,” Smith says. “I mean this is a disgrace. To sit up there and watch this team last night look like straight garbage … every respectable team you go up against waxes your behind, and why? Because KD has no help.”

He even ripped on the Barclays Center itself, saying that there’s nothing decent about the arena at all outside of the concession workers and those that help with traffic.

"Kevin Durant, I'm sad for you bro. … You have no help. And more importantly than anything else, you made the wrong decision by going to Brooklyn. … KYRIE IRVING BETRAYED YOU!"@stephenasmith LOST IT 😳😳 pic.twitter.com/gjw5tAZVcO

James Harden, who has gotten off to a very slow start this season, also caught some shrapnel from Smith as well.

“You got a guy in James Harden, not first year, this is the second year in a row. Mad love for James Harden. You got to get your act together bro. You ain’t James Harden right now,” he explained.

While there’s a lot going on in the three-minute clip of Smith screaming about a 10-5 team that still has 67 regular-season games left, his statement about KD making the wrong decision signing with the Nets certainly stands out.

“Kevin Durant, I’m sad for you bro,” Smith began. “You’re all alone. You have no help. And more importantly than anything else, you made the wrong decision by going to Brooklyn.”

I’m sure Smith will apologize for his rant if the Nets continue to win 10 out of 15 games, win their division, and make a run at an NBA title.