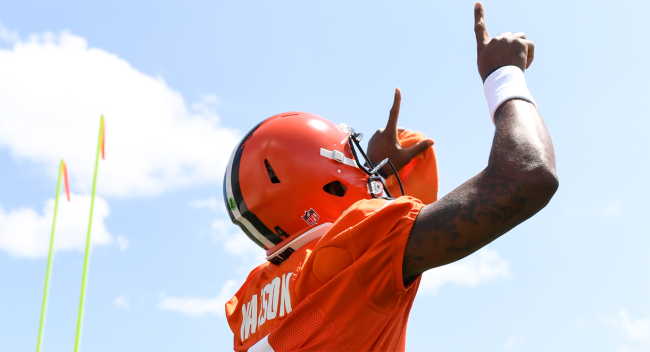 Stephen A. Smith was on hiatus from his gig on the ESPN show First Take. Then, Monday morning, Deshaun Watson received his suspension from the NFL… his six game suspension.

And despite what O.J. Simpson thinks, Stephen A. Smith is simply not going to just let it “go away.”

That much was clearly evident as Smith broke his hiatus (which he has been on since June 24) to blast the NFL for its handling of, as The Juice put it, “the Deshaun Watson situation.”

“If you are the league and you are the shield, the simple fact is that Deshaun Watson found himself in this situation,” said Smith. “If you’re the National Football League, ‘Okay, you’ve impugned the shield, because you brought this unwanted attention to our brand, and as a result that is the reason we want to hand down whatever suspension it is that we want to hand down.’ Because the NFL has been trying to make amends for their dereliction of duty in some people’s eyes as it pertained to Ray Rice, they’ve gone the route of, as far as I’m concerned, trying to resemble law enforcement.”

Smith said that after an over yer long investigation, now everyone wants to know, why six games? What evidence did the NFL have? What evidence is the league withholding? What else is there to reveal?

“The NFL has gone through extraordinary lengths to try to do what law enforcement is supposed to do,” Smith continued. “That’s my problem with all of this. Where there’s smoke there’s fire. There is no way in hell that Deshaun Watson can claim complete innocence, but to be fair to him, he has ADAMANTLY expressed the fact that he has been innocent of this.”

Smith went on to say, “What we do know is what the NFL has decided to do. And I think they’ve made a huge mistake by trying to resemble law enforcement and it’s going to come back to haunt them in a very big way.”

As is pretty much always the case, NFL fans were split between agreeing and disagreeing with what Stephen A. Smith had to say.

Tom Brady was acquitted by the judge of deflating any footballs, and still received 4 games suspension.

What this tells me is, I don't need proof, I just need to make an accusation and I can destroy a man's career and reputation.

I would agree with your opinion but there is one outlier when it comes to this case: Judge Robinson is making her decision based on what the NFL can prove based on the facts, not guilt or innocence. The NFL didn’t prove enough to warrant an indefinite suspension.

It’s more insane to think that there was 66 different female masseuses used by Watson. 23 settled with him, 30 with the Texans. Money is the bandaid, but Watson is a deviant sexual predator, no charges on non-violent actions but still, no red flags? Wow

Then, of course, there were these people…

If you can pick up a phone and talk you can sit in a chair and talk on tv. You’re being paid millions. Go to work