Stephen A. Smith Looks Like A Member Of Boyz II Men In This Hilarious Old Ass Pic Of Him In A Vest 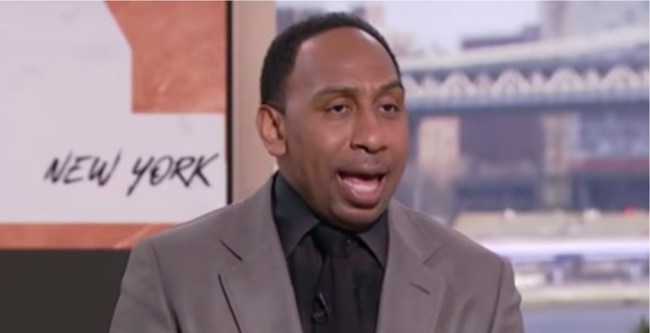 Stephen A. Smith might be best known for his loud, obnoxious, over-the-top opinions on ESPN, but before he was ranting about God knows what, he was, apparently, trying to look fly as hell. I know this to be true because I just saw an old ass picture of Smith making quite the fashion statement in a multicolored vest, sporting a button-down shirt that resembles a turtleneck. It’s peak ’90s, guys.

For those who haven’t yet seen the unforgettable image, brace yourselves, because it’s straight outta the Will Smith school of fashion. Take a look below.

I can’t believe no one told me young Stephen A. Smith was a whole fashion icon pic.twitter.com/B3XlBJMN1R

Dude looks clean, so I hope whoever Stephen A. Smith was trying to impress, he got her attention, because that’s a bold look, my friends. He’s come a long way in his fashion choices since, hasn’t he?

The picture was taken from Smith’s days in college at Winston-Salem State University, where he played hoops and wrote for the school newspaper. But, let’s just call a spade a spade here, Stephen A. Smith was really just trying to swoon the ladies on campus, assuming he was wearing sh*t like this on the reg.

As you might imagine, because it’s Stephen A. Smith and the Internet just loves to comment on him, Twitter had some incredible reactions. Some of the best ones are below.

Stephen A look like a young Bobby Brown. #PlayaPlaya

You have been hoodwinked, bamboozled, led astray, run amuck, and flat-out deceived.

Stephen A. Smith looking like Calvin from 'Paid In Full.' pic.twitter.com/HtzLdMCDmP

Stephen A Smith look like the knuckle head in every 90’s movie pic.twitter.com/XC2OWBKa6x

Put some respect on @stephenasmith’s name.

He had swag back in the day 😂 pic.twitter.com/WJlQUAnihj

As a kid of the ’90s, I can’t hate on Stephen A. Smith’s look too much — I mean, I was wearing multicolored polo shirts with Umbros, a backwards hat and Air Jordans around, so who am I to make fun of this look. Unfortunately for the ESPN talent, though, he’s famous, so when things like this pop up, people are going to react. I’d love to hear someone ask him about the outfit tomorrow on First Take, so please make that happen, I need to know more about what was going on here.