Stephen A. Smith Says Steve Nash Being Hired By The Nets Is ‘White Privilege’ 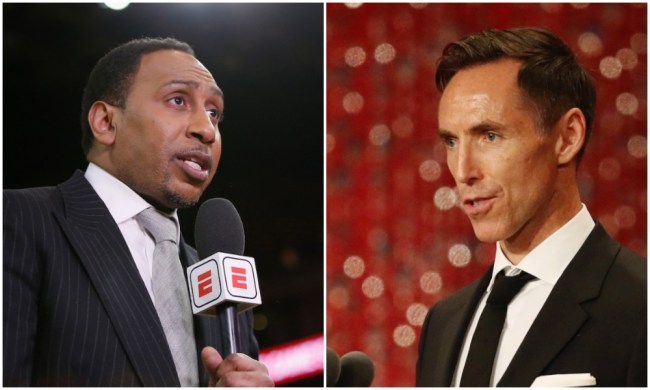 The Brooklyn Nets have been on the lookout for a new head coach after Kenny Atkinson stepped down as the man in charge back in March. Jacque Vaughn took over, and while some assumed he may slide into the permanent head coaching role, the Nets went out and hired Hall of Famer Steve Nash.

Nash inking a four-year deal to be the newest head coach of the Nets was a bit of a surprise when it hit the news desk on Thursday, but when you break it down, the hire makes a lot of sense, at least on paper. While he doesn’t have any coaching experience, he was a consultant for the Warriors in the past. He’s also one of the greatest point guards ever, so that could translate pretty well on the bench, too. Hall of Famers usually understand the game pretty well.

Stephen A. Smith and the ‘First Take’ crew tackled the news on Thursday. Smith acknowledged all of Nash’s accolades, how great he was as a player, and that he understands that both Kevin Durant and Kyrie Irving signed off on this, but he decided to sum up the hire as an example of “white privilege.”

“This ain’t about him what I’m about to say, ladies and gentlemen, there is no way around it,” Smith said. “This is white privilege. This doesn’t happen for a black man.”

After explaining that the hire is an example of “white privilege,” Smith then goes onto to say what a great guy Nash is and that he may do a fantastic job. He also brings up the George Floyd death and tries to relate that event to the hiring of a basketball coach.

Stephen A. Smith on Steve Nash being hired to join KD and Kyrie as the Nets head coach: "This is white privilege." (Via @FirstTake) pic.twitter.com/6Kl22zsjgW

While it’s true that Nash doesn’t have any coaching experience, Derek Fisher didn’t have any either the day he was hired by the Knicks in 2014.