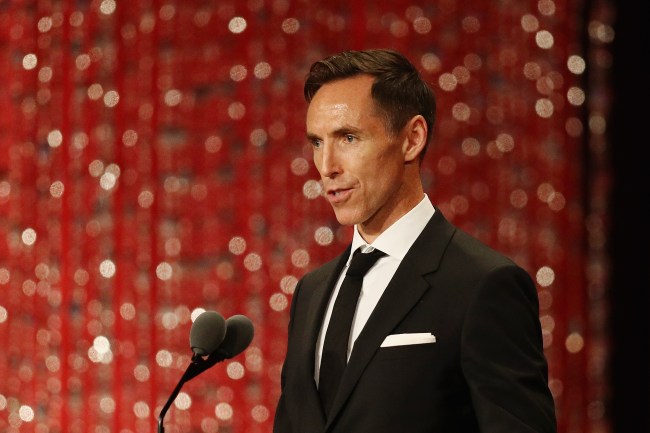 Hall of Fame guard Steve Nash has signed a four-year contract to become the next coach of the Brooklyn Nets, sources tell ESPN.

Steve Nash is heading to Brooklyn to coach Kyrie Irving, Kevin Durant, CARIS LAVERT, and a host of budding young talent in his first coaching job ever. What an incredible posting for him. Everyone knew that when Durant’s achilles blew up last year in the finals, it would be somewhat of a rebuilding year for the Nets. Kyrie only played 20 games and underwent season-ending shoulder surgery. So yes, the Nets’ stars are a little… rickety. But Kyrie is 28, Durant is 31, and the Nets looked pretty good in the bubble before the actual playoffs started and they were swept by the Raptors.

More importantly, Nash feels like a steady, reassuring choice to lead a team looking to the return of its two new megastars—both of whom have shown a flair for the dramatic arts. Kyrie is, at times, insufferable, and it will be interesting to see if his legacy is cemented more in his locker room histrionics or his incredible ability on the court. We’ll see if Durant and Irving can gel.

Call me crazy but there’s something incredibly reassuring about a head coach who was one of the best free throw shooters of all time. Nash led the league twice in FT %, shooting 94% in 2010 with the Suns. Free throw shooting feels like a good barometer of keeping one’s head.

So, congrats to Steve Nash and happy apartment hunting. Would love to see what insane Williamsburg former-bicycle-factory-turned-loft-apartment he finds, especially as New York apartment prices are plummeting.

PS- fun fact that I JUST learned: Steve Nash is R.J. Barrett’s godfather. What? The more you know.