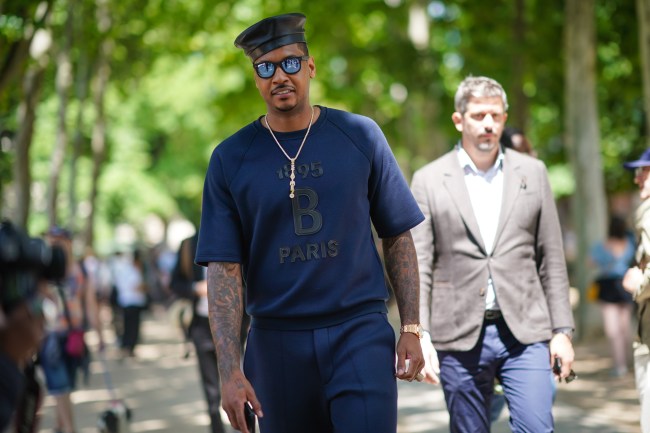 We are less than a week removed from a damning report by ESPN’s Baxter Holmes who allegedly claims sources inside the Rockets organization all came to the same conclusion about Carmelo Anthony: he  “just can’t play NBA defense anymore.”

Rockets sources claim that Anthony “really, really struggled” to adapt to the team’s defensive schemes and it was apparent as early as training camp.

One rival front-office executive went as far to say Melo “can’t defend, can’t close out, his feet are slow and he gets blown by.”

This is all not to say that the Rockets didn’t do him dirty, releasing him after 10 games and effectively signaling to the rest of the league that the 35-year-old isn’t worth the trouble.

As the 2019-2020 NBA kicked off last night, the eventual Hall of Famer is still without a team, and in Stephen Jackson’s estimation, this is a cruel injustice.

In a recent edition of Jackson’s podcast with Matt Barnes, All the Smoke, the former NBA champion believes the league is conspiring to blackball the 10-time All Star.

Man if this is true, that would be terrible. Free Melo. pic.twitter.com/z1Ij8HPjhH

“It’s the same situation they did to a lot of players. They put him in a situation they know he’s not going to succeed, make it look like he can’t play no more, make it look like he’s a cancer and just push him out. And once they get you to that point where you’re a cancer or you can’t play no more, it’s a text that’s sent out to every team — it’s a mass text that sent out to every team, every team’s CC’d, ‘Don’t (expletive) with him!’

“That’s what happened to A.I. It happened to me. It happened to a lot of guys. And it’s definitely happening to Melo. Melo ain’t a company guy. He’s never been a company guy. He’s going to speak his mind. He’s going to march to the beat of his own drum. And they don’t like that at times. It ain’t no question if anybody today said that Melo is not better than 60 percent of the players in the NBA right now, they’re a damn lie. And it’s personal. Melo definitely belongs in the NBA, and he definitely got blackballed. It ain’t a secret, man.”

The “Melo is better than 60 percent of the players in the NBA” is a tagline we hear ad nauseam, and even if it’s true, it’s an incomplete truth.

It can also be true that Melo has failed to accept a diminished role in pursuit of team goals and his inability to defend the perimeter in an NBA that is stocking up on long-range shooters with the increasingly reliance on the three ball is enough of a deterrent for teams as is. This could be offset if Melo has proven to demonstrate leadership skills, but he hasn’t, and taking on the ego of a former superstar without any one the tangential benefits is a strategic suicide mission.

While it’s entirely possible Carmelo has been blackballed in the NBA, Stephen Jackson may be confused as to who’s actually responsible for that.