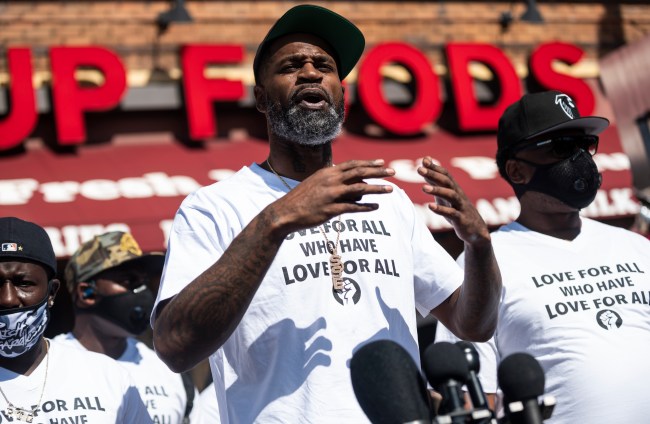 "Equal justice under the law must mean that every American receives equal treatment in every encounter with law enforcement regardless of race…Hopefully #GeorgeFloyd is looking down right now & saying this is a great thing that's happening for our country…in terms of equality" pic.twitter.com/7rNQ4EX8Gq

Trump’s speech irked Jackson who went on Instagram and posted video sending a stern warning towards the President to not use his brother’s name anymore during speeches.

“We coming to get you out the White House, Donald Trump.”

“Do not speak on my brother’s name. That damn sure wasn’t a compliment.”

“Hey, this message is for Donald Trump,” “Do not speak on my brother’s name.”

“You see how the whole world stood together? Arm to arm, race to race, everybody standing for love? 50 states, 18 countries. That’s what me and my brother Floyd did. So we coming to get you out the White House.”

Jackson, who grew up with Floyd, has been one of the most vocal supporters of the protest and has vowed to bring justice for Floyd’s family.

Stephen Jackson promises to be there for the family of George Floyd, and will stop at nothing until justice is served 🙏 pic.twitter.com/1jy80fu7gw