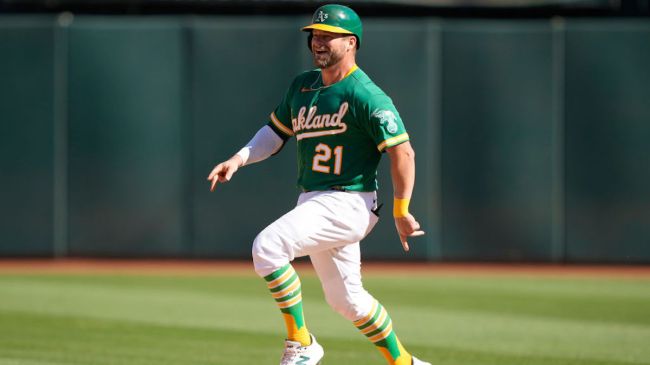 Unfortunately for the Oakland A’s and their fans, the team is far from the Moneyball glory of a decade-or-so ago, as the team not only finished with a pitiful 60-102 record but also boasted some of the most poorly attended professional sporting events you’ll ever see, as some of their games at RingCentral Coliseum drew just 2,500 fans.

Still, just like Brad Pitt opined in Moneyball, “How can you not be romantic about baseball?” And while the A’s haven’t given their fans all that many reasons to revel in the game’s romance, their sending-off of now-retired catcher Stephen Vogt is, if nothing else, quite heartwarming.

During his final MLB game on Wednesday, 37-year-old catcher Stephen Vogt — who has played with the Tampa Bay Rays, Milwaukee Brewers, San Francisco Giants, Arizona Diamondbacks, Atlanta Braves, and Oakland A’s over the course of his decade-long MLB career — had his children announce his first at-bat at his final game and it’s the ultimate heartwarming moment to remind you that (most of these) athletes are regular people just like us.

Vogt's kids announced their dad before his at-bat, followed by a standing ovation from the fans 💛 pic.twitter.com/bZsklMgQUG

Vogt’s storybook career finale didn’t end there, either, as he also hit a home run in what would ultimately be his final at-bat.

How can you not be romantic about baseball? pic.twitter.com/uJbZztRhbM

With the 2022 MLB regular season wrapped up, the playoff berths are locked in with the postseason set to begin on Friday.

In the American League’s Wild Card round, the Tampa Bay Rays will take on the Cleveland Guardians, and the Seattle Mariners — making their first postseason appearance in over 20 years — will face the Toronto Blue Jays.

Over in the National League, the New York Mets will be facing off against the San Diego Padres while the St. Louis Cardinals take on the Philadelphia Phillies. The winners of those series will then go on to face the league’s division winners this year: the New York Yankees, Houston Astros, Atlanta Braves, and Los Angeles Dodgers.

RELATED: The New York Mets Are Considering A Surprising Strategy For Their Wild Card Matchup Against The Padres