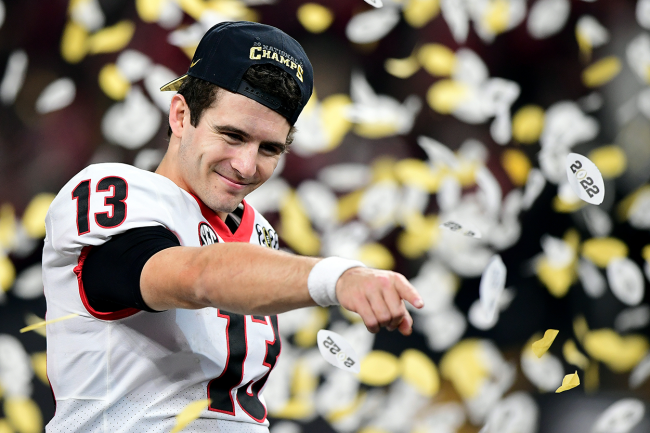 When Stetson Bennett committed to Georgia as part of the Class of 2017, there was little thought put into the idea of playing with his little brother. Now, six years later, it is happening.

Luke Bennett, a recruit in the Class of 2022, committed to Georgia on Thursday.

Luke, a hybrid between running back and wide receiver, will join the Bulldogs in similar fashion to his older brother. He will be a preferred walk-on with his sights set on becoming a scholarship player one day.

Because Luke and his twin brother, Knox, are six years younger than Stetson, there was never supposed to be any overlap. However, because Stetson redshirted and received an extra year of eligibility due to the COVID-19 global pandemic, he will be a sixth-year senior while his little brother is a freshman.

Prior to Georgia’s decision to offer him as a PWO in February, Luke was not entertaining any D-I offers. He was looking at opportunities from schools like The Citadel and New Hampshire.

Luke Bennett will need to continue to get bigger and better while at Georgia.

Luke stands only 5-foot-10, 175 pounds, so he will have work to do once he gets on campus in Athens. But, despite his size restrictions, he puts up consistent 4.5-second speed and had a dominant high school career.

He was named first-team All-Region during his senior season and his school went 48-6 during his four years on the varsity level. Luke played in a run-heavy offense and was primarily a blocker. Even with the lack of touches, he scored 13 total touchdowns on 34 catches and 31 rushes in his career.

At Georgia, Luke will be a slot receiver. He, like his older brother, will have to pay his dues and put in the work. But if we know anything about the Bennett family, it’s that we should never count them out.

As for Knox, he too hopes to play for Georgia one day— just not on the gridiron. He is the tallest of the three brothers and is planning to play junior college baseball at Chipola College in Florida and eventually wants to transfer to UGA like his older brother did after spending time at Jones County.