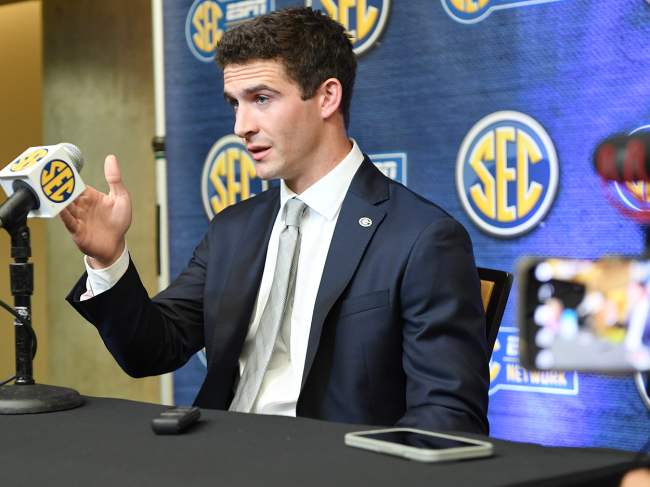 Stetson Bennett’s life turned upside down last fall. The 24-year-old quarterback had one of the most unique journeys in college football history and it forced him to acquire a new phone.

Bennett, who was a two-star recruit out of high school, received only one FBS offer from Middle Tennessee. In turn, he chose to walk-on at Georgia his freshman season but did not take a snap and transferred to Jones County Junior College.

During his one year on the JUCO level, Bennett threw for 16 touchdowns and 1,840 yards in 12 games. As a result, the Bulldogs offered him a chance to return on scholarship and he accepted.

After backing up Jake Fromm in 2019, Bennett took over the starting job in 2020 before being replaced by J.T. Daniels. Daniels was the starter again in 2021, but injuries kept him off of the field and Bennett led Georgia to its first national championship in four decades.

It was an incredible run from an undersized, under-recruited quarterback who wasn’t supposed to be there. It also changed everything— Bennett went from a two-star to a national champion.

During SEC Media Days, the Georgia-native who is returning for one last year of eligibility in 2022 spoke about the reaction to his national championship. He got so many texts that he had to upgrade his phone.

Stetson Bennett used to be flip phone guy but that is no longer the case.

Bennett did not have a smart phone like the vast majority of people who own a cellphone today. After winning the title, it was nearly impossible for him to text everybody back because the flip phone technology was so out-dated.

“I do. I had to get rid of the flip phone. Oh geez, let me get weak. It was brutal trying to TI-9 it up. And my contacts wouldn’t switch over because they weren’t compatible or something like that. Oh my goodness, I had like 500 text messages — and I just had to be like ‘thanks.’ So I couldn’t deal with that so I had to get rid of that.”

By the time that Bennett graduates next spring and hopes to hear his name called in the NFL Draft, he will be 25. Despite his age, he will be less than two years removed from using a cellphone that has been considered outdated for at least 10 years. Welcome to the 21st century, Stetson Bennett.