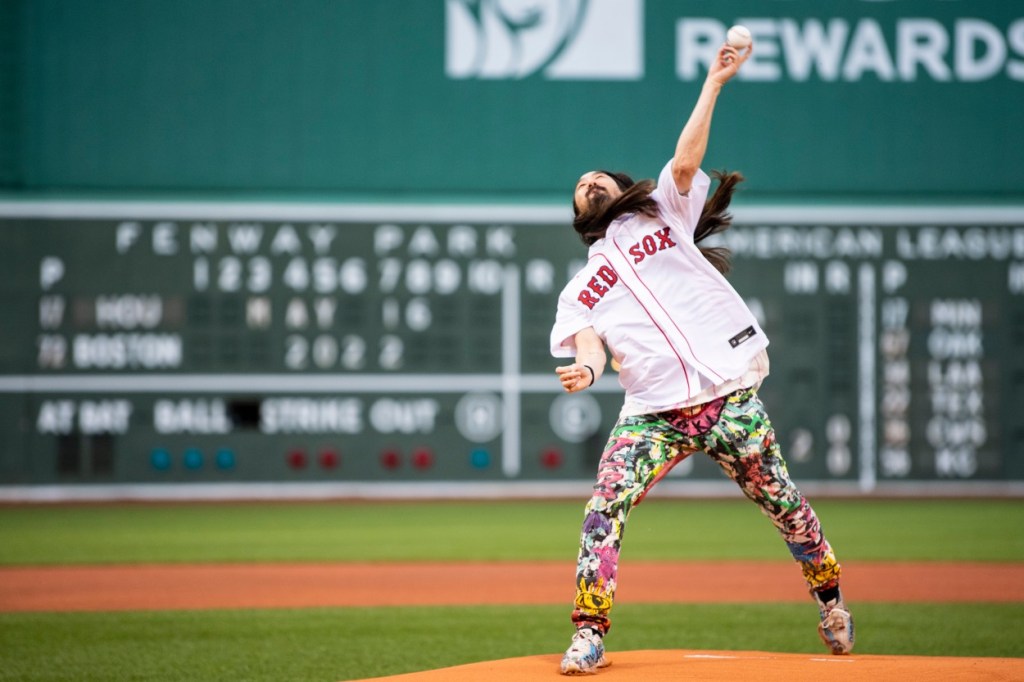 DJ Steve Aoki is extremely talented at producing banger after banger and putting on electrifying performances for clubs and EDM festivals. He has seen immense success throughout his career and is one of the wealthiest DJs in the industry’s history. But the dude sucks at baseball, point blank period.

Steve Aoki was given the honor of throwing the ceremonial first pitch at Fenway Park on Monday night as the Boston Red Sox hosted the Houston Astros. It’s unclear if adrenaline or nerves played a bigger factor but the end result was the dude throwing a ball about 15 feet over the catcher and deep into the net behind home plate.

Tons of baseball fans are calling this the worst first pitch in baseball history. I’m inclined to agree but at the same time, I think it’s worse and more embarrassing if the pitch comes up short. At least Steve Aoki threw it WAY past the catcher so he can’t get roasted for being weak. On the other hand, this is one of the most horrendous pitches ever seen. Let’s check it out and see what the fans are saying…

Here are three different angles of this pitch:

If he was throwing a cake, it would’ve been right down the middle. pic.twitter.com/Cv0fpt7HJr

First pitch or trying to throw one over the Green Monster? 🤔 pic.twitter.com/2uhvDZXqIR

50 Cent’s ceremonial first pitch will always be in the discussion of the ‘worst ever’. Steve Aoki’s pitch has now entered that conversation as well…

Never thought 50 Cent would be off the hook 🤣pic.twitter.com/agGfwHgBbi

No way the pitch was worse than those pants.

I’d actually argue this is the best ceremonial first pitch in Fenway history, not the worst.

No one, not even Steve Aoki tonight, will ever dethrone my guy @JordanLeandre55 for all-time greatest first pitch at Fenway 😂👑 pic.twitter.com/hY65q8773o

The people assuming that Aoki’s awful first pitch was intentional seem to be doing so for two reasons. First, they think he did it for social media hits and second, they point out that he throws cakes on stage and believe that somehow makes him good at throwing other things.

Steve Aoki is one of the wealthiest and most successful DJs on the planet. He has tens of millions of followers across his social media channel and rakes in millions of dollars every year for his performances.

The guy absolutely does not need to go viral for throwing a horrible pitch, it just doesn’t add up. And throwing a cake is nothing like throwing a baseball. THe only logical explanation here is he didn’t practice throwing the first pitch beforehand.