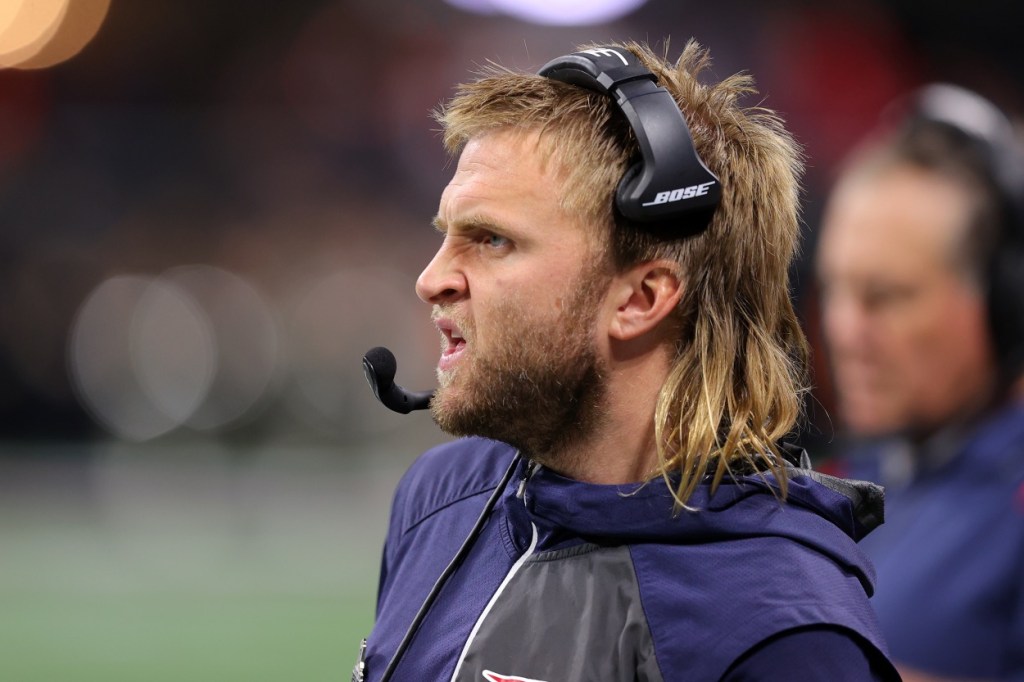 Steve Belichick is one of those figures in the NFL whose stardom really seems to outshine his role on the field. He has been the Outside Linebackers Coach for the New England Patriots since 2020 and coaching with the Patriots since 2012. But if you were to ask NFL fans about him, many would answer ‘Bill Belichick’s son, the guy from the tongue wagging gif‘.

The now infamous tongue wagging moment came during the 2021 NFL season. Tom Brady returned to Foxborough Stadium for the first time since leaving the New England Patriots. And at one point in the game, the camera panned to Steve Belichick on the sidelines who was tongue wagging like Jim Carrey with cottonmouth in Me, Myself, & Irene.

Steve Belichick joined former NFL defensive end Chris Long on Long’s Greenlight podcast. And Steve was given the opportunity to explain what happened in that moment and how it all played out. Here’s his answer with his quotes below if you’d rather read than watch a clip.

This YouTube video should start at the moment where Steve Belichick discusses the tongue wagging:

Here’s a shorter version (quotes below as well):

Steve Belichick: “I got killed after that game. I became a gif and you know everyone loves to see that. I was just thinking a lot and try to stay ahead of it.

I’ll never forget after the game my wife and Pat Chung, they were sitting together watching the game and they just kind of put their arm around me like it’s going to be okay. Like, what the f**k are you talking about?”

Can we talk about the Christmas tree in the background???

With all due respect, Steve Belichick, have had AMPLE time to take that Christmas tree down. At this point I can only assume it’s left up as a novelty similar to the glorious mullet on his head.

What are NFL fans saying about this Steve Belichick clip?

He really, truly sounds just like Bill. But that’s not at all weird given it’s his dad and they’ve worked together for a decade.

I’m not sure Steve Belichick looks like he eats raccoon as much as his mullet actually looks like a raccon-skin hat. There’s a striking similarity between the two.

His voice makes me think Bill somehow cloned himself and raised the spawn so he can continue coaching forever. I like the Emperor-style, hoodied version we currently know, but the mulleted version will allow that voice to be in our lives for decades to come. #Belichick https://t.co/RZ0HtPHPFv

If Bill Belichick did figure out a way to clone himself we’re all in trouble.