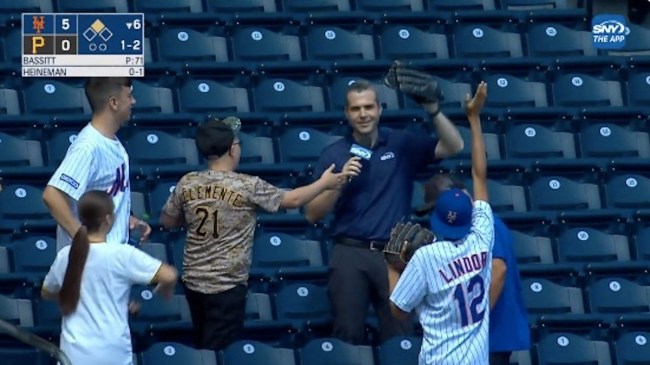 After a bit of a panicked beginning to September that saw the New York Mets lose three straight games (their worst losing streak of the years), sole possession of first place in the NL East, and Cy Young-winning pitcher Mac Scherzer to the IL. Needlessly to say, regularly scheduled programming from the New York Mets fanbase, myself included.

Luckily for both the team and their fans, though, the bats woke up during Wednesday’s doubleheader against the Pirates and put up 15 runs across the two games, which gave them two wins and a half-game lead in the NL East.

And while Mets fans may be unsure of what the rest of this season (and hopefully, the postseason) has in store for them, one thing remains for certain: the team’s broadcast on SNY remains the best in the business.

We’ve written about the Mets’ booth, which includes the likes of play-by-play man Gary Cohen and former Mets greats Keith Hernandez and Ron Darling — a few times on this here website given how often they seem to produce viral moments. This article, though, focuses on arguably the most underrated member of the time: sideline reporter Steve Gelbs.

During one of Wednesday’s games against the Pirates, Gelbs — who was in the stands with a glove — was able to track down a foul ball, which was the first he’s ever scored in his life. As Gelbs was gloating to Cohen and the gang in the booth, though, a hilarious Mets fan named Bob interrupted the broadcast to accost Gelbs for the ball.

You have to love it when a plan comes together. pic.twitter.com/IjXhI5Zf5L

Given that they have one of baseball’s best records, the Mets *will* make the playoffs this year, it’s just a matter of how, as ceding control of the NL East to the Braves would see them have to compete in a one-game Wild Card game. And it’s a damn shame that the SNY team would be on the air to call those games. Baseball has to fix that — not only do fans deserve to hear their hometown guys, but these dudes also have earned the right to call their team’s postseason games.