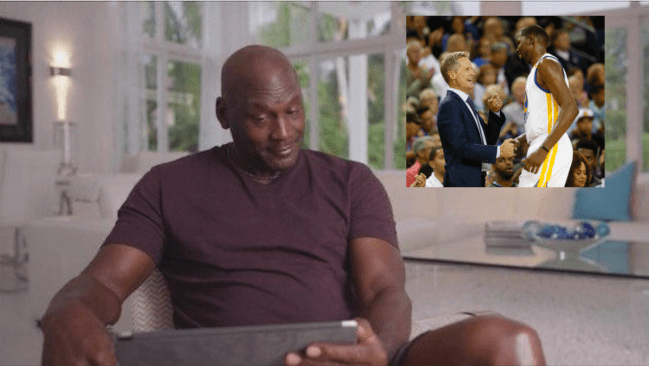 I don’t think too many would argue with the idea that Michael Jordan is the greatest basketball player to ever live.

Many of us who bared “witness” to Jordan’s greatness during the days of Napster and humpback televisions won’t hesitate to rattle off pre-rehearsed testimony on why there is no debate, and when presented with empirical data suggesting the lines may be a bit more blurred, we all fall back on the enigmatic “killer instinct” defense, as if greatness is indirectly proportional to the self-esteem of your teammates.

Steve Kerr dared cross political lines this week after claiming in no uncertain terms that Kevin Durant is a more “gifted” basketball player than the man who helped Kerr secure four of his five NBA titles as a player.

Kerr, who serves as an assistant on this year’s Tokyo Olympic squad, spoke with NBC Bay Area’s Raj Mathai and couldn’t contain his giddiness over reuniting with the man who helped secure two of his three NBA titles as a coach.

“He just showed he’s the most talented basketball player on earth, if not of all time,” Kerr said. “Honestly. He’s just so gifted. I loved coaching him, and I’m looking forward to doing so again.”

“I think he’s more gifted [than Jordan], I really do,” Kerr said. “That’s saying something, but Kevin is a different … entirely different breed. He’s 6-11 with guard skills, unlimited 3-point range, passing, shot-blocking — his shot-blocking at the rim, it’s just stunning. Watching him this year was really, really gratifying to see.”

Michael Jordan the next time he sees Steve Kerr pic.twitter.com/PETI9cWY5j

The mere suggestion that Durant’s length and touch extends his shooting range far beyond Jordan’s and makes him a more effect shot blocker will make Linkin Park’s Hybrid Theory screech to a halt in many of our CD players.

But Kerr may be right.

My wife is my GOAT, but there are just some things Emily Ratajkowski brings to the table that my sweetie doesn’t have in her toolbox. Does this mean I’d replace my beloved atop the mountain just because Em Rata has a stunning complexion and more iconic curves than a Dalí painting?

Ok maybe this is a bad example.

Moral of the story, we should be more accepting of nuance in the GOAT debate without concessions being proof-positive that our holistic worldview is complete garbage.