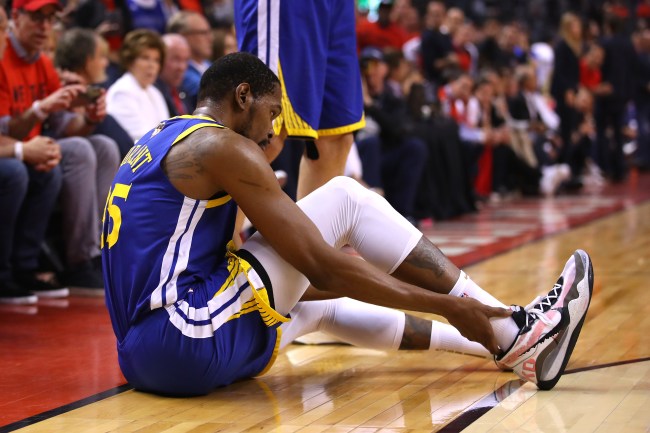 After sitting out for 4 weeks under careful guidance from Warriors team doctors after sustaining a calf strain during a playoff game vs the Houston Rockets, the Warriors organization decided Kevin Durant was healthy enough to play in game 5 of the NBA finals.

While Durant looked good early on in the game, he would later go down with another leg injury in the second quarter.

I ain't no doctor be Kevin Durant injury in slow motion look like you can see his Achilles roll up his leg 🤷🏾‍♂️it's hard to look at pic.twitter.com/ns3CeCMrx0

After the game, WarriorsGM Bob Myers confirmed that Durant had suffered an Achilles injury during an emotional press conference.

"It's an Achilles injury. … He'll have an MRI tomorrow."

Bob Myers holds back tears as he explains the magnitude of Kevin Durant's injury. pic.twitter.com/glQ6j5hATe

Warriors GM Bob Myers on Kevin Durant injury: "He was cleared to play tonight. that was a collaborative decision. I don't believe there's anybody to blame. I understand this world, if you have to, you can blame me. I run our basketball operations department."

While on the midnight edition of Sportscenter ESPN reporter Rachel Nichols claims that head coach Steve Kerr said that the team doctors had told him that Durant “couldn’t get more hurt” and that had “passed that threshold”.

During the postgame press conference, Kerr was asked if he had any regrets about playing Durant and he said he was going to “leave that to Bob Myers”.

Steve Kerr is asked if he has any regrets about bringing Kevin Durant back into the series. “I’m going to leave that to Bob (Myers)."

There’s certainly going to be to plenty of reports about what went on behind the scenes that made the Warriors think Durant was healthy enough to play.