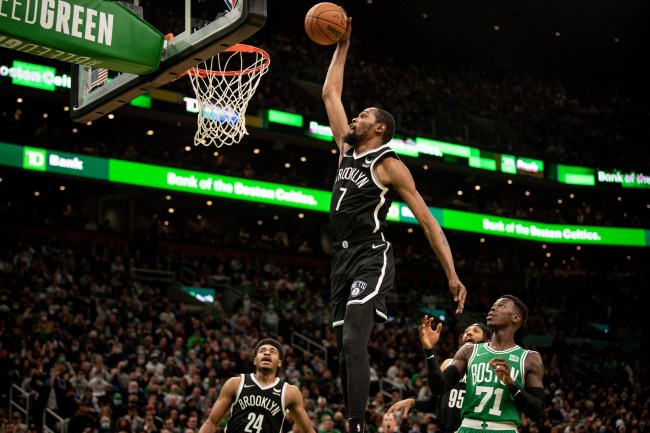 THe Brooklyn Nets have had a tough year. Their record might not show it, but they’ve been dealing with a lot already this year.

Obviously, there’s Kyrie Irving’s absence, which was completely unexpected and was a big hit to the team. To make matters worse, the NBA decided to make James Harden earn his points for the rest of his career when they changed the way refs called certain fouls. Harden is still adjusting his game to adapt to the changes.

Just these two factors have been a lot for the Nets to deal with. Then you tack on scattered injuries and it becomes even more impressive that they are still the top team in the Eastern Conference at 15-6. If you ask head coach, Steve Nash, that’s because of Kevin Durant.

Durant has been putting in a pretty heavy workload lately and Nash was asked about it after yesterday’s win over the Knicks. His response made it clear just how important Durant is to the team’s success.

Steve Nash on Kevin Durant playing 40+ minutes: "I don't know what options we have other than to play him less and lose more."

Just to be clear, that’s not Nash saying “we lose when he doesn’t play”. That was “I can’t really ever take him off the floor if we’re going to win”.

That is an incredible ting to say about a 33 year old who tore his achilles just a couple of years ago. To be required to play 40 minutes for your team to win and have that team in 1st in the conference is extremely impressive.

Kevin Durant’s numbers further back up just how important he is to this squad. He’s currently tied for the league’s scoring lead at 28.6 points per game while also averaging 7.5 rebounds and 5.5 assists. Just the other night, he put up 39-9-7 with 4 steals in 45 minutes against the Suns and that wasn’t even enough for the Nets to get the win.

I don’t know if postgame quotes from coaches can be factored into MVP voting, but I don’t think there’s a better definition of “valuable” than telling the media that the top team in the East won’t win if one player doesn’t play 40+ minutes.