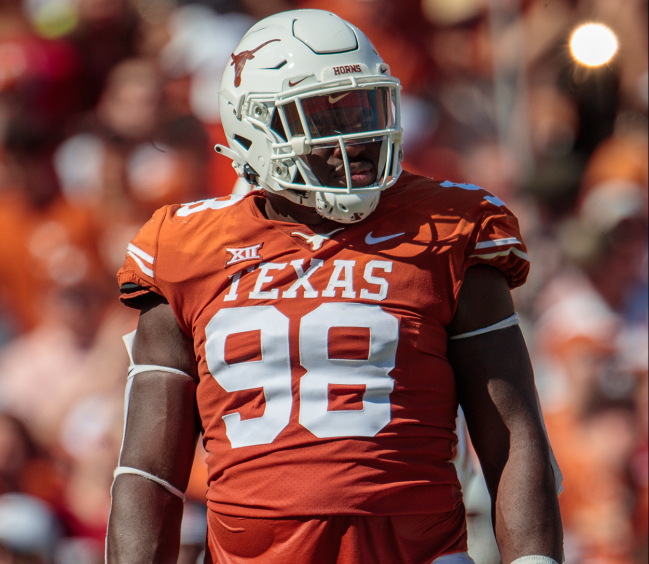 Texas fifth-year senior defensive lineman Moro Ojomo made headlines last week with some comments about the state of the program in recent years. Now he is being cut off from the media.

On Thursday, Ojomo spoke during a press conference and had a lot to say about whether the team listens to him as a leader. He also detailed how things have operated in recent years and what he believes it will take for the Longhorns to return to greatness.

“They’re 18-to-22-year-olds that want to chase women, want to chase money, want to chase alcohol and they don’t see the future,” Ojomo said. “They’re very distracted by what is in front of them. it’s such a hard thing, especially guys that haven’t been in a winning culture. That’s why it’s very easy for a lot of these powerhouses to keep going, because it’s established. The new guys just come in and they’re like, ‘oh shit, this is how we do have to do it. Oh shit, this is what we do.’ It’s so much more difficult.

“They always talk about coming here and changing stuff. Coming here changing stuff, like it’s ingrained. You’re uprooting, what? 10 years of shit that’s just been let go and go by. They’re more worried about being on Sixth Street than, like, balling and making $50 million as crazy as hell. I don’t know why.”

Ojomo then went on to discuss what he believes is a necessary culture change.

“Players have to make a stand,” he said, “basically [say] ‘enough is enough’. 7-6 B.S. [at] Texas isn’t happening anymore. We have the ability. We have the talent. Get your mind right. We’re gonna go win.”

Now, Ojomo is not wrong. Something needs to change. Texas has gone 83-67 since 2010 and no matter how “back” that everybody says the Longhorns are, they continue to underachieve.

If Texas wants to get back on the right track, it will take leaders like Ojomo and the rest of his senior class. He is right about that.

However, his comments may have been a little bit too brash for Steve Sarkisian’s liking. The second-year head coach discussed what Ojomo had to say on Tuesday and was not thrilled.

While he understood what his senior defensive lineman was saying, and actually believes that his intentions were good, Sarkisian was not a fan how how he went about the conversation. In turn, Ojomo is indefinitely cut off from speaking to the media.

All in all, Sarkisian was very eloquent in his response. He understood where Ojomo was coming from and appreciates his passion as someone who wants to be a leader, but wishes he would have kept the “family business” in the family.