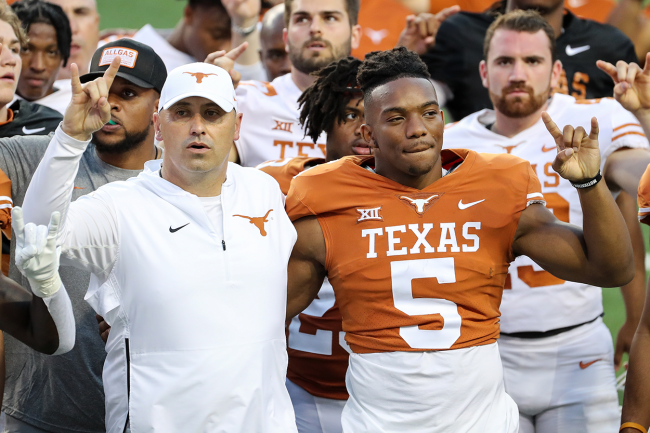 When Steve Sarkisian took over at Texas in January of 2021, there was a lot of hope that the program would turnaround right away. That did not happen in Year 1 and the Longhorns went 5-7.

After a myriad of offseason acquisitions through the transfer portal and recruiting, the buzz in Austin is palpable. With former No. 1 overall recruit Quinn Ewers likely set to take over the offense alongside Bijan Robinson, Texas sits firmly within most preseason Top 25s— even ranked as high as the Top 10.

Is this the year that the Longhorns return to national relevance as competitors? Are they back?

Only time will tell, but Sarkisian thinks that this fall will be much better than last season. During a recent appearance on ESPN’s Always College Football Podcast, the second-year head coach said that his team is much more together than it was a year ago.

“Getting to the point of playing as a team and being accountable to one another. Being committed to the cause. Because I’ve felt like that was one of our issues a year ago,” Sarkisian said. “We almost operated in silos, to some degree. And that’s not atypical for Year 1, as you’re trying to gain trust and earn trust with the players and vice versa. But I just feel so much more like a team now than we were a year ago.”

In addition, Sarkisian spoke about some of the challenges of the Austin market and how he has chosen to handle it.

“I think it’s unique for sure,” he said. “One of the things when I took the job and as I went through Year 1 is you have to recognize what you signed up for. You can’t have your head in the sand and just try to do it like somebody else did it in another school. You have to recognize what your own issues are, and then take them on head on. That’s the only way I’ve known how to do it.

“We are in a unique market, in the city of Austin. It’s got the city of a million people, and three million in the surrounding area with no pro sports. We have no NBA, no NFL, no Major League Baseball. Essentially, Texas Football is the pro sports team in town. You have to know, even as a recruit, what you sign up for.”

As for the brand that is the University of Texas, Sarkisian recognizes that there is nothing else like it.

“I mean, this brand is unique. I’ve got it on my shirt right here. This logo, doesn’t need to say Texas above it. It doesn’t need to say Longhorns below it. Everybody knows what that logo represents. When you sign with the University of Texas, that’s what you’re playing for. The other things are a byproduct of that. I think that our players have bought into that idea. They’ve committed to it. They recognize the stage that were on. They recognize the expectation and the standard here. And that’s winning championships. That’s why you come to the University of Texas. It’s no secret.

“Whether it’s swimming and diving, volleyball, baseball, softball, track and field. Everybody is the best at what they do, and football should be no different.”

Football should be no different. Sarkisian is right. The question now is whether he can be the one to lead the Longhorns ‘back’ to being the best at what they do on the gridiron.