UFC Legend Stipe Miocic On His Most Painful Injuries, Why Cleveland Unjustly Gets A Bad Rap, And Revitalizing Gyms With Modelo 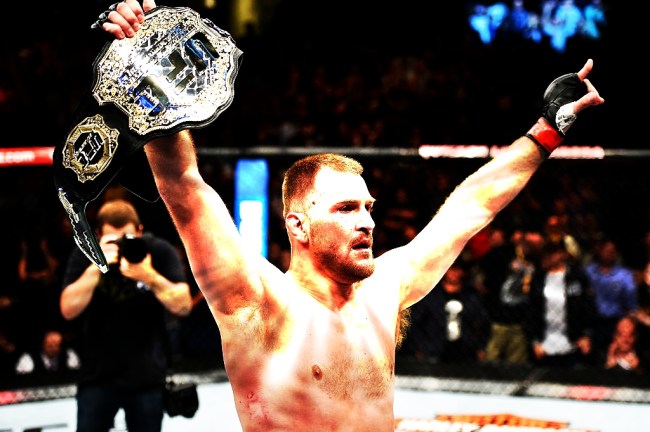 Former two-time UFC heavyweight champion Stipe Miocic has amassed career earnings north of $7 million in his decade-long combat sports career, a sum that stretches far in the small Cleveland suburb just miles from where he was born.

No one would blame the 39-year-old for giving Dana White his two weeks notice and drifting into a well-deserved obscurity.

On top of his grueling UFC responsibilities, Stipe works as a part-time firefighter paramedic, becoming the only UFC heavyweight champion at the Valley View, Ohio firehouse, believe it or not.

Miocic’s blue-collar mentality was molded from an innate desire to help those in his community, and his recent brand partnership is further proof of that.

The UFC, in partnership with Modelo, announced an initiative with Rebuilding Together, a leading national nonprofit in safe and healthy housing. As an ambassador, Miocic’s mission to revitalize Revolution Fight & Fitness in his birth town of Euclid, Ohio was a “no-brainer.”

Modelo and the UFC partnering up with the Rebuilding Together organization to work with gyms across the country, it was a no-brainer and I love every second of it. I love to give back.”

You’ve been fighting in the UFC for over a decade now. How has your approach to the sport evolved as you’ve gotten wiser and picked up more battle wounds?

“Don’t work harder, work smarter. Listening to your body, and enjoying the process.”

I know you were a little bothered by the UFC not offering you a shot at the interim title fight, and you said you planned to talk with Dana White about it. Is Dana usually receptive to this type of criticism behind closed doors and how do you expect that conversation to go?

“It’s part of the game. We’re going to sit down and talk and figure everything out. It’s a business. You can’t make everyone happy, but at the end of the day, we’ll sit down and have a conversation and it will all be solved.”

There’s a poll going around Twitter this week ranking the Top 5 Fighters of All-Time. Do you have your own list? And if so, are you on it?

“Yeah of course, I’m number 1 (laughs). I don’t concern myself with that, I’m just glad the sport continues to evolve and fighters are getting better.”

You’ve battled in 24 fights in the UFC dating back to your debut win against Joey Beltran in 2011. What would you say was the most difficult and painful injury to overcome?

“I’ve had six knee surgeries. Those are terrible. I’ve dislocated my ribs, fingers. Apparently I broke my fibula, but I didn’t know I did and it healed up. The doctor showed me the X-Ray and goes, ‘This must’ve hurt, no?’ And I said, ‘I’m so beat up all the time so I can’t answer that question.’

I remember the first time I hurt my knee I was a sophomore in high school. I heard a pop and I sat up to start wrestling again and I looked down and there was no knee cap. It was gone. Then my knee popped back into place and blew up. That was a little rough.”

You’re 6’4”, hovering around 240 pounds, an imposing, intimidating presence. What is one non-masculine thing you’re into that people may be surprised by?

“I like watering my ferns. I do take pride in my ferns. They’re huge this year, which feels good. I love it. Going outside in the nice weather, give them some water, maybe have a conversation with them (laughs).”

You’re still living in Cleveland around the area you grew up, correct?

Yep. Not leaving. The gym Modelo rehabbed was in the city I was born in, then I lived in Cleveland for about two years, then lived right about my grandparents in a duplex in Euclid. So I never left.

Cleveland gets a bad rap as a city that doesn’t have much to offer. How would you fight back against that stereotype?

“The people are incredible. We have a great food scene. We were struggling for a little bit with night life but when LeBron came back that helped a lot. Then we got casinos. Now it’s flourishing.”

If there was one piece of advice you’d give to upcoming fighters hoping to succeed in the sport, what would that be?

“Have fun and practice makes perfect.”

I couldn’t write a Stipe article without congratulating the champ on the recent birth of his second child: Mateo Cruz Miocic, The Future Heavyweight Champ of The World.

Now if you’ll excuse me, I need to drive to Ohio to sign this kid as a client.