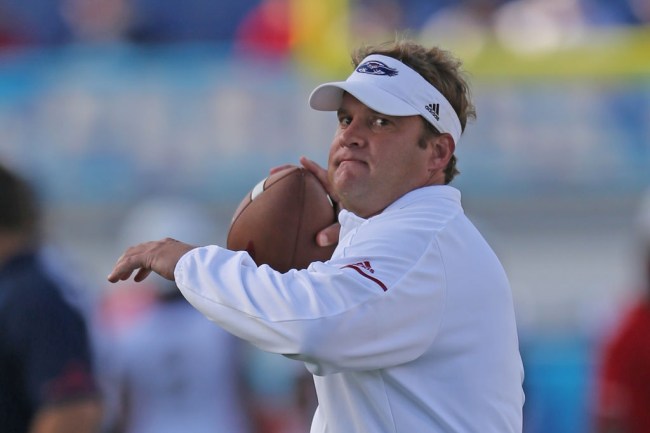 Lane Kiffin’s nearly two decade long coaching career has been a ride. The 43-year-old Florida Atlantic coach was sacked by the Oakland Raiders shortly after becoming the youngest head coach in modern NFL history, got fired by USC on the tarmac of the airport, and famously bailed on Alabama before the 2016 national championship game.

Kiffin didn’t always have coaching as his calling. As a backup quarterback at Fresno State in the 90s, Lane was pushed into coaching after the arrival of freshman quarterback and eventual NFL number 1 pick, David Carr. Kiffin recalled in the past how he threw with Carr for 10 minutes when he arrived on campus and decided he should start coaching because he knew he’d be third string.

In a recent interview with Stadium, David Carr shared his recollection of Lane Kiffin’s coaching genesis story and it’s so Lane Kiffin it hurts.

David Carr tells the story of how Lane Kiffin's coaching career began in the most @Lane_Kiffin way possible.

Carr: “Lane was great. He was exactly what you’d expect, he was just a fifth-year guy that didn’t want to give his spot up to a freshman.”

Carr: “And then I started taking reps from him in practice, and his last day as a Bulldog player was when he came out, we were supposed to be in full pads, and he came out with shorts and a t-shirt on. And Jeff Tedford says ‘Lane, what are you doing?’ And he says ‘well, I figured I could come out here in shorts and a t-shirt because you’re just gonna give all my reps to Dave.’ And he [Tedford] sends him in, ‘get off the field’ so he leaves practice, disappears. I’m like ‘OK Lane quit,’ right?

“Well, Monte Kiffin is Lane’s dad. Monte’s a coach of the Tampa Bay Buccaneers, defensive coordinator at the time. Monte’s not having this, right. 30 minutes goes by, Lane comes back out without his helmet, shorts and t-shirt, and he is now the wide receiver assistant coach. That’s how his coaching career began.”

Kiffin’s only amendment to Carr’s recollection is his choice of attire:

All’s well that ends well. Lane is raking in over $1 million a year and living in balmy Florida. I guess it pays to be a shit quarterback.