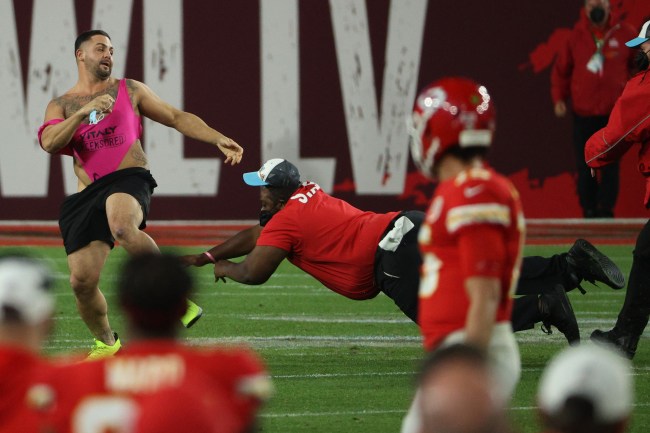 As I type this, a full 12 hours after the Super Bowl LV, I am still grappling over the question on everyone’s mind: why bother streaking during a football game, any football game, if you’re just going to take a dive at the one-yard line?

This infuriates me far more than the $500 bet I flushed down the toilet.

Kevin Harlan's call of the idiot on the field (w/video from @rlacey23) : pic.twitter.com/iAI7WDi5xx

We fucking did it 😈 pic.twitter.com/xZ3cGMxCwO

Zdorovetskiy himself has ran onto the field during World Series and World Cup games, has had several more serious run-ins with the law, including a violent assault on a female jogger in Miami Beach last year and a five-day stint in an Egyptian prison after climbing the pyramids.

While it’s unknown how he wrangled Yuri Andrade into the stunt, the price to pay was slim: one night and jail and a $500 posted bond the following morning.

Zdorovetskiy did not appreciate TMZ calling the dude who ran onto the field in a pink thong leotard an “idiot.”

You fucking mad bruhhh that we got more attention that you in 30 seconds than you existed https://t.co/xgt05g4ztM

This ass clown and woman beater has 10 million YouTube subscribers and his x-rated site probably enjoyed a late-night surge (especially from Chiefs fans) because of his latest stunt. The world is a lot of things, but just it is not.