Let’s Discuss These Super Bowl-Winning QB Rankings, Specifically Where The Mannings Fall On The List 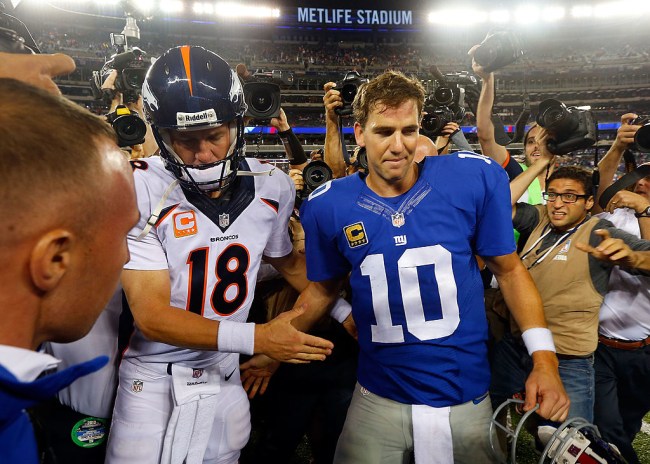 It’s officially talking season. The NFL season is behind us, college football has been over for what feels like six months, the NBA season hasn’t hit that sweet spot yet where teams are actually battling for playoff spots and March Madness is just far enough, so that means we have to come up with stuff to talk and argue about it.

Kevin Boilard over at 247 Sports has given us the first of what I’m sure will be many just completely made up and probably a bit bias charts with names on it that Twitter is going to argue about.

He put together a list of the 33 Super Bowl-winning quarterbacks putting players in ‘elite’, ‘legendary’, and ‘good enough’ categories. What did he base these rankings on you may ask? He replied to someone on Twitter and literally said they’re based on talent. So, at the end of the day, these rankings simply reflect who he sees as talented and then not so talented, whatever that means.

As for the criticism here, we’re going to start from ‘good enough’ to ‘legendary’ because I was born in 1992 and the only quarterbacks I actually saw play in the category are Trent Dilfer, Nick Foles, and Joe Flacco. This is the category your dad may get mad about, but not me. Dilfer being 33rd on the list makes sense, for sure though.

As for the ‘elite’ list of names, it’s another group dominated by quarterbacks from back in the day. Kurt Warner being ranked higher than Drew Brees may look suspect and that’s because it’s just flat-out wrong. Ben Roethlisberger ahead of Joe Namath and Ken Stabler is another head-scratcher.

You may not have caught on yet, but there’s a theme here: quarterbacks from back in the day stink compared to quarterbacks today according to these rankings.

Now we’ve arrived at the ‘legendary’ list of names.

Tom Brady leading the way is correct, he’s the GOAT and I’m not sure a single human on the planet is arguing against that these days. Then, there’s Patrick Mahomes in the No. 3 spot, who’s played in exactly 37 NFL games. Yes, he’s talented as all hell, but giving him the No. 3 spot seems like a bit of recency bias.

We’ve arrived at the first Manning on the list, Peyton, in the No. 4 spot and I’m going to preach that little brother Eli should be ahead of Peyton here. It’s nice to see Eli even make the ‘legendary’ list of names, a place where he belongs, but it’s disrespectful to have him slotted below his older brother.

Remember, we’re talking about Super Bowl-winning quarterbacks here. Yes, these rankings are based on ‘talent’, but it’s clear we’re talking about the talent seen during these players’ actual Super Bowl games. If this was just based on talent, Eli wouldn’t be ahead of the likes of Brees or Russell Wilson, because that would just be wrong.

Peyton played in four Super Bowls and won two of them. In those four games, he threw exactly three touchdowns and five interceptions to go along with a QB rating of 77.4 and took home Super Bowl MVP honors in his first Super Bowl win. If you want to look at his QB rating in just his two wins, it was a whopping 69.2.

Eli played in just two Super Bowls but took home MVP honors in both wins. He threw three touchdowns and one pick in those two but carried a QB rating of 96.2. Oh, he also beat the Patriots in both of those Super Bowls and one of them was a pretty big deal with New England chasing a perfect record.

These rankings mean absolutely nothing, zilch, but they’re unbelievably disrespectful to No. 10.