The Sweat 16: We Ranked The Sweatiest College Basketball Coaches In The Country, Because March 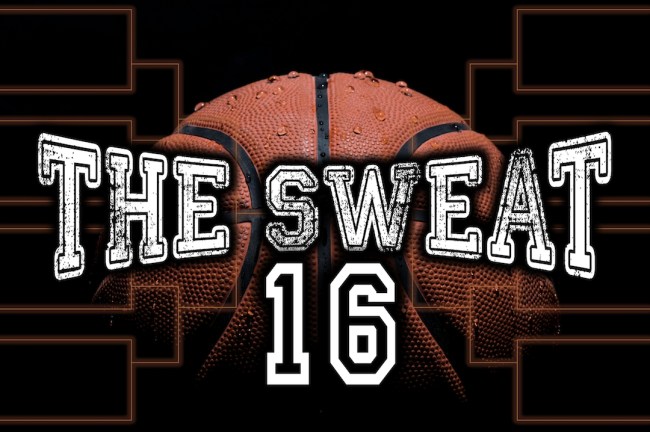 We have arrived, ladies and gentlemen. The depressing winter weather is almost entirely behind us and we are embarking on arguably the most exciting two-week stretch in sports. Pat yourselves on the back, you’ve earned it.

Over the coming days, you’ll hear plenty of sports talking heads debating upsets and Cinderella stories. What you won’t hear being talked about is an epidemic that has plagued coaches since basketball was played on peach baskets. This rampant plague is the incessant sweating that reduces a great coach to merely a good meme.

In the meantime, the folks at Mizzen+Main want to know which four coaches from the Sweat 16 will be deemed “the sweatiest” this March. The winner will receive a special bundle of moisture-wicking dress shirts from Mizzen+Main. 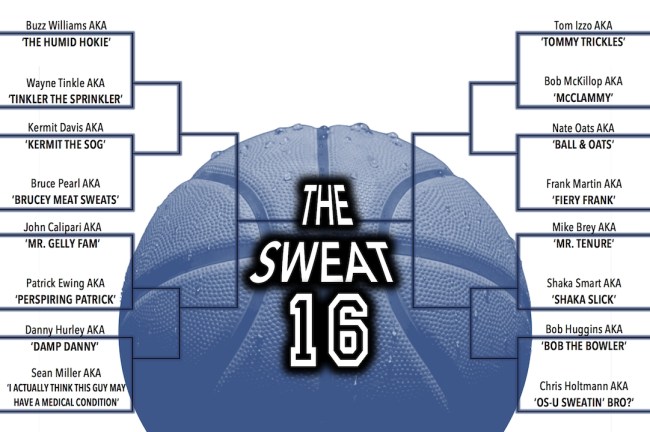 I don’t need to even know what you look like, but if I know your name is Buzz, I don’t want to sit next to you on a flight or spot you at the gym or defend you in the post in a game of pick up. Either you’re a continuous facet or you’re a large ginger with a pet tarantula who bullies his little brother Kevin and probably reeks of pork rinds.

Buzz Williams is the former, and the epitome of a high-energy guy who wakes up and goes to bed looking like he just did CrossFit in the Sahara. If only his players took after his wetness come March, when his team has a reputation of getting bounced faster than you can say ‘Get this man a towel.’

But, if Ewing doesn’t produce a tournament appearance in the near future, we may start to see him flood the hardwood floors like the good old days.

Little known fact about Wayne Tinkle: When he’s not manning the ship for the Oregon State Beavers, he’s volunteering down at the local jail where his armpits are used to hose incoming inmates off before they’re issued jumpsuits.

An honorable thankless job that no one asked him to do, besides his wife, who is tired of waking up with her nightstand floating away.

Don’t feel sorry for her though, the writing was on the wall for marrying a guy named ‘Tinkle.’

Kermit Davis might be as sweaty of a coach as we’ll see this college basketball season pic.twitter.com/Rd6bGDB0M4

Kermit Davis’ Running Rebels will likely punch their ticket to the Big Dance just one year after losing 13 of their final 14 games under Andy Kennedy. Davis won 20 games in his first season with a team that had as much depth as a Real Housewife and virtually no post play. If he doesn’t win SEC Coach of the Year, it will be borderline criminal.

If snubbed, Ole Miss fans should take comfort in knowing that their coach’s trophy case almost certainly won’t be empty, as I have officially unofficially named him College Basketball’s Sweatiest Coach Of 2019. In my estimation, Davis sweat out several deserving coaches to win the prestigious award, but ultimately, his sustained soaked-to-dry shirt ratio this made him the runaway winner.

There’s a lot of basketball still to be played, but I’d bet the family farm that even a Mizzen + Main shirt couldn’t keep this human faucet dry.

Bruce Pearl always looks like he’s about one Italian sausage away from flooding his suit with meat sweats.

The meat sweats are a unique strain of perspiration that attack random areas of the midsection and underboobs and leaves nebulous patches of wetness on the fabric it comes in contact with.

This is precisely why Coach Pearl’s shirt often looks like a map of Pangea and probably smells like a Jimmy Dean factory and cheap cologne.

It’s impossible to determine if Calipari is sweating on the job or the gallon of hair gel he massages into his scalp is melting. I’d guess it’s the latter because when you’ve had as many incriminating allegations made against you as Cal has, coaching a basketball game is as easy as a University of Kentucky education for a scholarship player.

With the Wildcats likely to lock down another number 1 seed, you’ll likely be seeing a lot of Calipari in March, who may actually break a sweat fighting his players when they try to change into NBA jerseys at halftime.

Anyone who grew up watching the NBA in the 90s knows that Patrick Ewing is to sweat as the New York Knicks are to underachieving. Ewing played under the bright lights of Madison Square Garden, and for a decade they illuminated every stream of sweat that trickled down the Hall of Famer’s 7-foot frame.

Ewing has transitioned into a slightly less physically demanding job as the head coach of Georgetown, his alma mater, and led the Hoyas to a 3rd place finish in the Big East, their highest finish since 2015.

There was a time not too long ago when Danny Hurley was a high school coach at New Jersey’s St. Benedict’s Prep, molding a young player named Tristan Thompson. Hurley recalled at that time, he was so broke that he once peddled for spare change from strangers who pulled into the gas station to fill his beat up Toyota Rav-4.

There’s no more uncomfortable sweat than driving with your gas light on just hoping to make it to the gas station. Mr. Hurley knows that panicky sweat all too well.

Luckily, that won’t be an issue for him anymore, as the 46-year-old agreed to a six-year contract worth $3 million annually to coach the four-time national champion Connecticut Huskies.  The Huskies finished the season 16-17, ending with an 84-45 loss at the hands of Houston in the AAC semifinals.

Hurley is tasked with turning a sleep-walking program back around to championship form, and that tall order can bring on a whole new type of sweat.

Is there still 8 minutes left in the first half or is it 4 am in a club in Ibiza and Sean Miller’s grinding his teeth and bouncing foot-to-foot while the lights come on and staff mops up around him?

I mean, Jesus, I haven’t seen anyone sweat this much at a ‘Big Dance’ since Kenny Powers popped a molly before chaperoning the school dance. A source within Wildcat locker room claims Miller’s halftime speeches are like no one else’s in college basketball. Apparently he just forces his team form a circle while he break dances in the middle for 15 minutes.

Ok, I’m typically not one to pull punches, but I’m going to hold off on any more jokes because it seems like Sean Miller has a perspiration problem and needs to consult a medical professional. Thoughts, prayers, and towels appreciated.

Tom Izzo gave up on life here and I can't stop laughing. pic.twitter.com/cHb7h7kACQ

Tom Izzo experiences more emotions in a two hour basketball game than the common man feels in a lifetime. I can all but guarantee he’s worked up a Soul Cycle sweat before the first TV timeout. You don’t earn a spot in the Hall of Fame and make 21 consecutive NCAA tournament appearances by staying drier than an overcooked pork chop.

Bob McKillop has been at the helm of Davidson basketball since Ronald Reagan was in office, far before Steph Curry put the Wildcats on the map. Despite being the Southern Conference’s Coach of the Year eight times in his career and Davidson naming the damn court after him, his coaching peers believe him to be the most under-appreciated coach in college basketball, according to a recent poll.

McKillop is currently in his 30th season and another Elite 8 run before he hangs them up would surely solidify him as one of the elite coaches of his generation. That sort of pressure against the clock would make even the coolest man’s sweat more than Kevin Garnett in a sauna.

The Naismith Award announced the 15 nominees for men’s basketball coach of the year, and Mr. Oats is on that list. The Buffalo head coach is the big swingin’ dick on campus after leading the Bulls to a top 25 ranking, signing a contract extension through 2023, and buying a $1 million mansion on the water.

The fine folks of Buffalo are expecting big things from their Bulls come tournament time, so this is no time for Oats to coast. I suspect he’s waking up nightly in a cold sweat shaking the thought of crapping the bed in the Big Dance and getting body-slammed through a table in true Buffalo fashion.

Martin is widely considered to be one of the toughest, most fiery coaches in all of college basketball. Not surprising from a guy who laid in a hospital bed in 2010 on the verge of death with a failing pancreas after he claiming he could just “sweat it out.”

Everything about Frank Martin is full throttle and impossibly intimidating. I suspect that the only person sweatier than him on any given coaching night is the guy his daughter brings home to meet the family. I wouldn’t wish that stress on my worst enemy.

Cant say Ive ever seen a college hoops coach, coach a regular season game in shorts and a t-shirt before. Mike Brey out here making Bob Huggins look like a GQ model pic.twitter.com/HhWL4eINOH

Does Mike Brey have reason to sweat?

The Floundering Irish find themselves at the basement of the ACC and have been about as fun to watch this season as my middle school basketball highlight reel. Just last season Brey passed Digger Phelps as the winningest men’s basketball coach in Notre Dame history after 19 years on the job, so a little complacency is expected.

But, after Elite Eight appearances in 2015 and 2016, the Irish won’t make the Dance for the second straight year and you gotta expect that Brey is getting a littttttle moist under that turtleneck.

Sage Observation Alert: Shaka Smart is a bald man. And speaking as someone who lost a bet in high school and was forced to bic my head, I know as well as Mr. Clean that once those beads start forming on the top of the dome, they run freer than Andy Dufresne escaping Shawshank.  It’s like throwing pickles on a glass window coated in vaseline.

I don’t think Shaka gets enough credit for multi-tasking quality coaching through the imminent threat of a flash flood warning at any given moment.

Close your eyes and imagine Bob Huggins in your average accountant suit. Did your brain just glitch out? Mine too. The only man who can rock a sweatsuit more seamlessly than the West Virginia head coach just won his sixth Super Bowl.

Huggy Bear graduated from WVU in the late 70s and has been the coach there for over a decade, so he’s earned the right to wear an oversized bowling shirt whenever he damn well pleases. Plus, if he didn’t wear that thing, the hardest working dude on that floor would be the intern with the mop.

Chris Holtmann does not appear pleased with that blocking call against Luther Muhammad #OhioState #Iowa pic.twitter.com/fMvYh67UWI

Chris Holtmann inked a deal with Ohio State before last season that made him the third highest-paid coach in the land with a salary of $7.15 million. Not a bad deal for a coach with a mediocre team and who just had to suspend his top scorer and rebounder for reasons unknown to the public.

While I don’t think Holtmann is going home to his palace and wiping his brow with hundred dollar bills, I do think a small bead of sweat is forming under his arms and once that thing starts running down his side, it’s ‘Oh Shit’ time for OSU.

Mizzen+Main want to know which four coaches from the Sweat 16 will be deemed “the sweatiest” this March. The winner will receive a special bundle of moisture-wicking dress shirts from Mizzen+Main.