Power 5 School Agrees To Shorten Their Game Against Overwhelmed Opponent 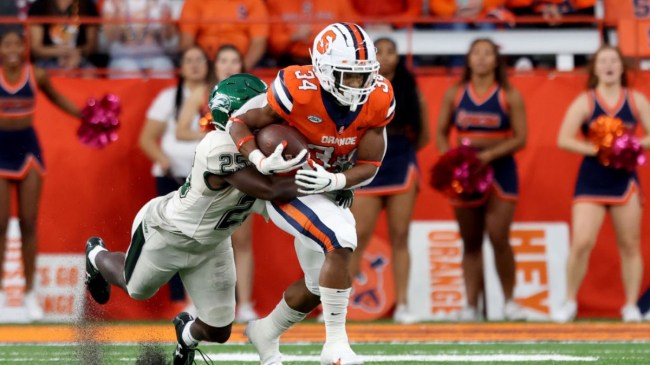 For the first time this season, an FBS football teams has enacted what appears to be a mercy rule in a matchup against an FCS opponent.

The decision came in a game between undefeated Syracuse and Wagner. The two teams’ head coaches talked at halftime and decided to play 10-minute quarters in the second half instead of 15-minute quarters.

The two teams have agreed to play 10-minute quarters in the second half.

This decision came after a first half where Syracuse was absolutely dominant. They scored 21 in the 1st quarter and tacked on another 28 in the 2nd, giving them a 49-0 lead. The offense would slow down for Cuse in the 2nd half.

Their players’ stats were even more impressive than the final score. Running back Sean Tucker ran all over Wagner for 232 yards and 3 touchdowns on 23 carries.

Syracuse’s quarterback, Garrett Shrader, didn’t throw a single incomplete pass int he game. He went 17-17 for 238 yards and 2 touchdowns throwing the ball and added another touchdown running the ball.

The decision to shorten the 2nd half was a smart one that more coaches should consider in the future when their teams are schedule for these kinds of games.

There’s no need to risk the health of your players in a game that’s gotten out of hand against an opponent that isn’t on the same level as your team.

We see a ton of these matchups every year, including ones involving some of the nation’s best teams. Those games sometimes get even more out of hand than this one, yet for some reason we don’t see more games shortened.