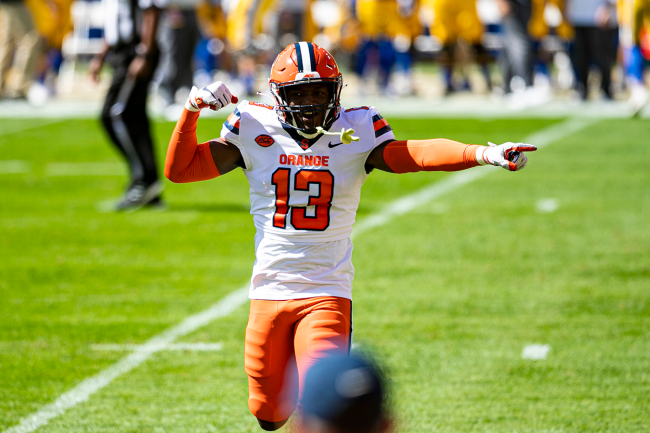 Syracuse football went 5-7 last season, but lost three games by a combined nine points. As the Orange look ahead to the fall, the 2022 schedule does not provide much hope to improve on last year’s record.

Syracuse will play Louisville, Purdue, Virginia, N.C. State, Clemson, Notre Dame, Florida State, Boston College and Wake Forest. All 9 of those teams have the potential to be difficult to beat this year, widely based on their quarterbacks— Malik Cunningham, Brennan Armstrong, Devin Leary, D.J. Uiagalelei, Phil Jurkovec and Sam Hartman, most notably.

The Orange’s daunting schedule opens at home against the Cardinals on September 3rd. Louisville went 6-7 last year but lost three games by a combined 10 points.

A large part of Louisville’s offensive production last year came from its quarterback. In fact, Cunningham accounted for 68% of his team’s total yardage and was involved in 39 of 50 total touchdowns.

Despite Cunningham’s impressive 2021 season, Syracuse linebacker Mikel Jones had a bold claim about his Week 1 opponent during ACC Media Days on Wednesday. He said that he is not super worried about the Cardinals quarterback.

Syracuse linebacker Mikel Jones on facing a quarterback like Louisville’s Malik Cunningham week one at home:

“…I dont see it as much of a challenge.”

Jones’ comment is incredibly embarrassing. Not only did Cunningham account for the vast majority of Louisville’s offense last year, but his recent history against the Orange would prove Jones’ statement to be incorrect.

Over the course of his last three starts against Syracuse, Cunningham has scored 13 total touchdowns. Louisville won all three games by a combined score of 127-27. And Jones, a rising COVID junior, was on the field for all three games.

But Jones doesn’t see it as much of a challenge. LOL, okay. Sure.

Maybe Jones should keep the focus to stopping Cunningham on the field, rather than giving him bulletin board material after he torched you in each of the last three years.