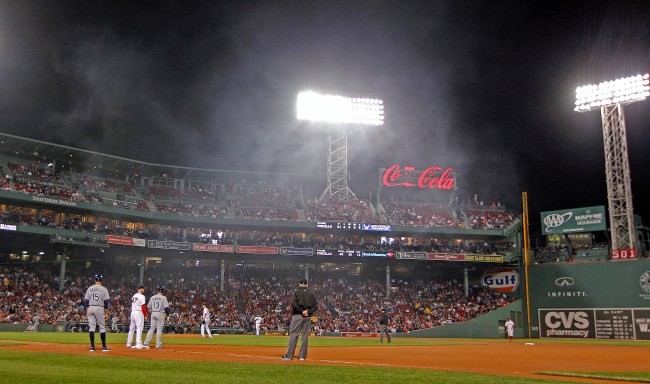 This, now, jerks the 2018 MVP from his trance. THC-infused sunflower seed fragments scatter down his front, many disappearing into his half-buttoned uniform. He wipes the drool from his mouth with the back of his batting glove. Then looks at the drool. Then giggles.

Betts scans the dugout, sees Chavis’ cleats poking out from under the dugout bench.

“Dude, Chavis was up like five innings ago.” Xander Bogaerts is making a sandwich. He brought his panini press again.

“Yep. Strike out or else it will be cold.”

Betts steps over Chavis and looks for his bat. He picks up a toy piñata bat, swings it a few times, and realizes it’s too light for a professional baseball game. Nobody remembers the actual piñata. Bogaerts claims they bashed it during opening weekend. Benintendi insists they busted it open during a charity event. Either way, it was full of tincture bottles, some of which broke because, you know, they’re MLB players bashing a child’s toy. The bottles that didn’t break were mixed into the gatorade jug during a game and Nathan Eovaldi got so high that he divorced his wife using the bullpen phone.

Betts drops the toy bat in favor of a real one. He steps out of the dugout. The crowd murmurs, the announcer forgets his name.

“Now batting for Boston… this guy, you know him well… it’s something Seussical, I know that. Ladies and gentlemen, Boston’s very own… Smokey Tips!”

Halfway through the 2020 MLB season, marijuana has taken hold. The league removed weed from its “drugs of abuse” list in December and by February, spring training had become the biggest pot fest in the world. Players and fans alike were obscured by clouds of purple smoke as the dank stench of that good good infused into the seams of America’s pastime. Commissioner Manfred tried reeling it in, tweeting “perhaps we should slow down a little?” This tweet was met by hundreds of thousands of subtweet gifs: teenagers mouthing “ok, dad,” people drawing squares, and of course, the Michael Scott “you are a thief of joy” gif. Manfred’s twitter was suspended and he is rumored to have found political asylum in the Dominican Republic.

A full twenty percent of league games have been forfeited mid-game because one side simply didn’t care enough to finish. Pitchers, incapable of finding the strike zone, have been replaced by tees. That’s right: major league baseball is now played as tee-ball. And even then, strikeouts are at an all time high. The Arizona Diamondbacks tee pitched a perfect game in June, pending an inquest about the tie-dye pattern on its shaft causing hallucinations for the batters.

Betts places the ball on the tee. He steadies himself, tries to focus his vision, tries to remember how to swing a baseball bat. Last season, this was the most natural process in the world. His at-bats were a time of deep and intense focus. Betts would dig his front toe in with purpose and resolution, as though this were the thing he was placed on earth to do. But now, his mind is everywhere at once. Is Greta Thunberg old enough to remember the Spice Girls? Doubt it.

He leans forward and swings. The bat smacks the rubber tee three feet below the ball. The tee wobbles like a noodle and the ball drops and rolls foul for strike one. He calls time with a wave of his hand. There’s really no need though, as the game can’t continue until he’s put the ball back on the tee. Also, the umpire left an hour ago to catch his daughter’s tuba recital.

Mechanically, Betts replaces his own ball. He swings again, whiffs, and stumbles as the bat tangles in his legs. Then, he falls. Somewhere out by Pesky Pole, a lone fan guffaws. Strike two.

Of course the one sport where snacking is encouraged was the first sport to get on board with weed. Average roster weights have skyrocketed. Pablo Sandoval needed a crane to lower him from a hole in his bedroom wall because his staircase was no longer wide enough for him to pass, and still the Tigers signed him to a two-year deal.

Betts, thinking of the panini, gives up. He leaves the ball at his feet and walks back to the dugout. “That’s the ballgame, folks,” sighs Dave O’brien, signing off prematurely for the eleventh straight game. “Red Sox forfeit.”

The ghost of Ted Williams shakes his head in disgust, then turns and evaporates among the leaves of the grow operation in the bullpen.