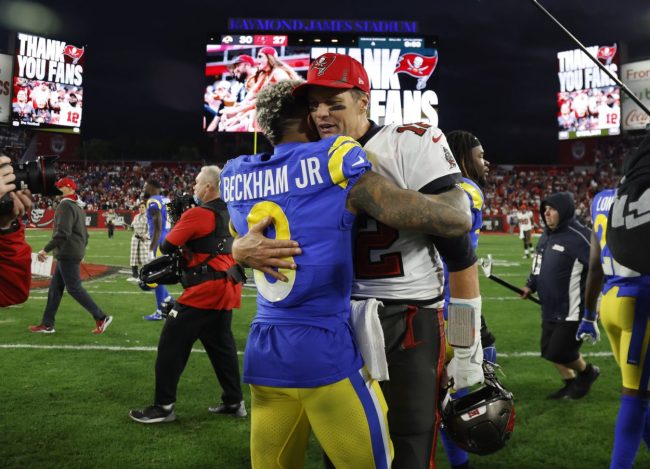 Sunday’s NFC Divisional Round game between the Buccaneers and Rams was one for the ages. After the game, although the fans at Raymond James Stadium went home sad, they also went home with a consolation promotion that resulted in a memorable viral photo.

Early in the first half of Sunday’s game, it was all Los Angeles. The Rams jumped out to a 27-3 lead that could have been extended to an even larger margin, if not for a few fluke plays.

Despite the big lead, as we have seen before, it was too early to count out Tom Brady. With 24 points in the second half, Tampa Bay tied the game with 42 seconds left and had to make one stop to head to overtime.

It could not. Cooper Kupp put the team on his back and set up a game-winning field goal with six seconds left.

Matt Gay came out, knocked in a 30-yard kick, and sent Los Angeles to the NFC Championship. As a result, Brady’s 22nd year in the NFL came to a close with a loss and the retirement debate began.

However, before Brady left the field, he made sure to congratulate his opponents. When he went over to hug Rams safety Eric Weddle, a memorable viral photo was born.

Brady and Weddle embraced, with the Raymond James jumbotron visible in the back. On the screen, it displayed a message that caught the eyes of viewers.

PDQ, a local restaurant that blurs the lines between fast food and fast casual, has run a promo all year— when the Buccaneers score a touchdown, fans get three free chicken tenders. It was probably a package that the chain purchased prior to the season, that resulted in an unfortunate consolation. 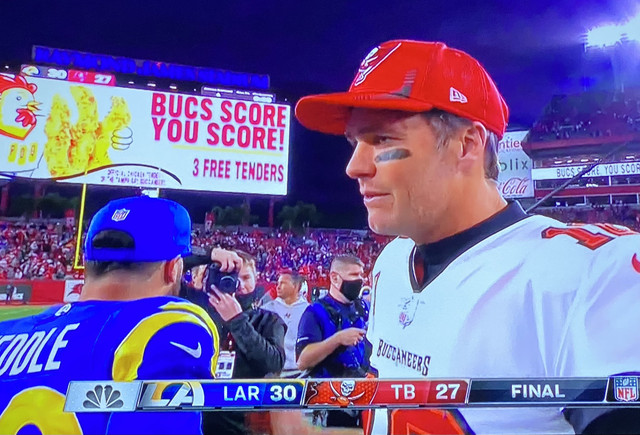 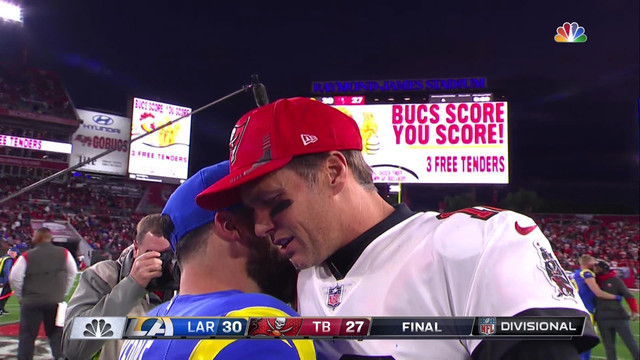 The timing was unfortunate. Brady, who may be retiring after the season, was relishing what could be his final moment on the field, after a loss at home. In the back, PDQ was advertising its free tenders.

Surely that will make everything better, right?

Well, some people were very excited. Others also found the promotion to be hilariously timed.

We really don't understand all the shade from peeps. Who doesn't want free chicken tenders? 😐

But food makes everything better. 😢

Hey, they are delicious tenders. 😙

Free chicken is better than not free chicken, right? What a moment! Now all we need is for Darren Rovell to tweet about how much free exposure PDQ received from that one NBC shot and everything will be right in the world.