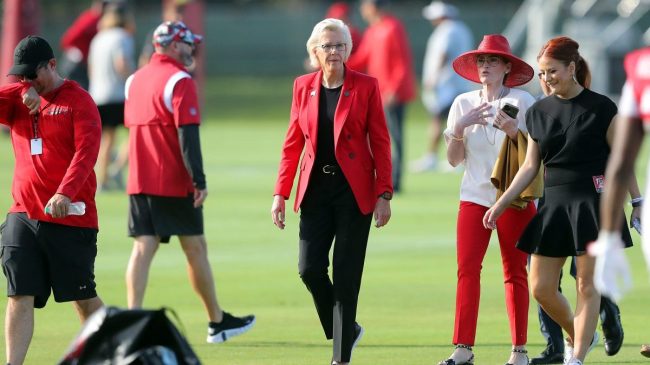 Things are rough these days for Floridians. The Sunshine State is currently getting absolutely battered by Hurricane Ian and citizens across the state have either evacuated or sheltered in place.

The Category 4 hurricane has led to incredible seasons. Weather Channel star Jim Cantore got kneecapped by a tree branch. Another newscaster used a condom to cover their microphone from rain and wind.

Tampa, especially, has been hit hard by the storm. The reverse storm surge was so bad in the city that sucked all the water from the shores of iconic Bayshore Boulevard.

But that doesn’t seem to matter to Tampa mayor Jane Castor, who just wants to get her football fix.

Given the threat and magnitude of the storm, you could excuse Castor is she forgot all about Sunday night’s game between the Tampa Bay Buccaneers and Kansas City Chiefs.

The NFL has already designated Minnesota’s U.S. Bank Stadium as a contingency site for the game should the Bucs not be able to host.

But in her best Lee Corso impression, Castor is now saying “not so fast!”

On another note: we're doing our best to keep the @Buccaneers game here Sunday. I have assured the @NFL that the only disturbance here Sunday is when the Bucs kick ass. 😉 pic.twitter.com/Mwp4EXPUlK

Castor took to Twitter on Thursday morning to let people know that she plans to forge ahead with the Sunday Night Football game.

A number of Floridians were not particularly happy about that decision or the subsequent tweet. Many felt it ignored the danger facing everyday citizens in Tampa in favor of supporting the NFL franchise.

Super empathetic to Floridians. THIS is the only thing that matters right now. 🙄🤦🏾‍♂️

your city is underwater rn and you worried about a football game 😭 https://t.co/STMnSoR9BS

Even some of Castor’s staff members seemed less than pleased with her photo op.

The Chiefs and Bucs are two of the league’s best teams, and the matchup is one of the best of the regular season. But that doesn’t stop fans from realizing where the game falls in order of priorities.

I'm no expert but seems like your and others’ services should be utilized elsewhere. https://t.co/KfIGcUgzBh

Or we could just have the game in Minnesota while you clean up a hurricane. Love to see that your priorities are football and not rescuing nearby victims of this natural disaster. https://t.co/aOiHOmNRwj

Not a great look!