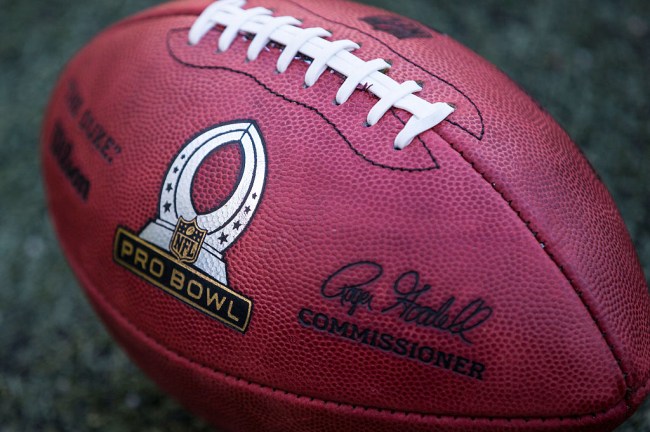 On Tuesday, the NFL released the list of players selected to represent their respective conferences at this year’s Pro Bowl, which is one of the highest honors someone in the league can receive.

However, there’s one major question that remains unanswered: How many of those guys will actually make the trip down to Orlando in February.

Despite the best efforts of the NFL to get people to care about the Pro Bowl, they’ve had a hard time getting over the fact that it’s objectively the worst all-star game in sports.

There’s actually something on the line when players from the MLB face off, the NHL’s showdown is just a goal-fest, and NBA fans get to see what it’s like when the best players in the world play a pickup game.

The Pro Bowl, on the other hand, sucks (aside from the one time Sean Taylor murdered a man).

This probably has something to do with the fact that the best players in the league don’t see any point in risking injury for basically no return and the came is basically just a matchup of two-hand touch.

According to The Washington Post, only 57% of players selected to the roster bothered showing up in 2017 and there’s evidence to indicate that number will rise much this year.

This might also have something to do with the Pro Bowl’s lack of stakes— a sentiment that was echoed by the Bears’ Tarik Cohen, who revealed the reason he wasn’t particularly excited about being selected to this year’s team:

“Nobody wants to play in the Pro Bowl. You want to go to the Super Bowl.”

The Bears have already secured a playoff spot, so while this sentiment might not be shared by players on noncontenders, it sheds a little bit of light on the problems the NFL face.

One guy actually had a good idea for an alternative.

You know what I'd watch instead of the Pro Bowl? Get the two worst teams in football to play the week before the Super Bowl. Winner gets the number 1 draft pick.

My solution? Get rid of the game and have everyone face off in a Madden tournament. I might actually watch that.