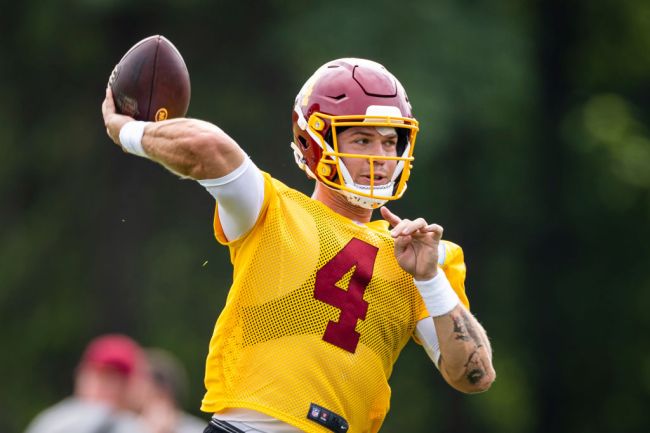 Taylor Heinicke has played in a total of just nine games in the NFL – one being a playoff game – but that’s all former NFL cornerback Fred Smoot needs to see from the QB to see that he could Heinicke could be the next Kurt Warner.

The comparisons between Warner and Heinicke are there on paper, well, sort of. Heinicke spent some time in the XFL before breaking through in the NFL while Warner dominated the Arena Football League before going on to have a Hall of Fame career.

But, that’s basically it when it comes to similarities between the two QB’s. That didn’t stop Smoot from reeling off his flaming hot take, however.

“The story has a lot of Kurt Warner,” Smoot told BMitch and Finlay of 106.7 The Fan. “The Rams had all the positions. They had the wide receivers. They had Marshall Faulk. They had the linemen. They had the defense. And then out of nowhere, here comes this Kurt Warner guy, not supposed to start, gets in the game, never gives the job back.”

Smoot wasn’t done there, he actually used the phrase ‘Hall of Famer’ when predicting Heinicke’s future.

“Hall of Famer. Heinicke has that feel to me. He has that, ‘You know what? If I ever get that job, I will never relinquish that job.’”

Sure, Heinicke could very well turn into the franchise QB for the Washington Football Team, but his numbers certainly don’t suggest that that’s a guarantee by any means.

The former Old Dominion gunslinger is entering his fourth season in the NFL and has attempted just 77 passes in eight regular-season games.

There is also a man named Ryan Fitzpatrick he’ll have to beat out in Washington in order to earn the QB1 spot this year, which is not going to be an easy task.

Nevertheless, Heinicke is the next Kurt Warner and could be a Hall of Famer when it’s all said and done, according to Smoot’s brain.