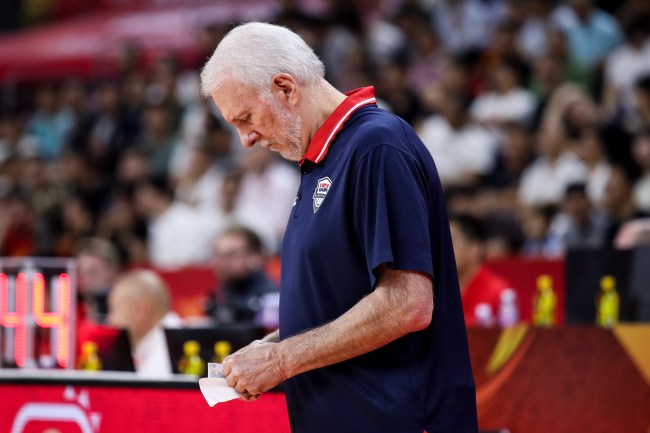 The U.S.A. has lost, on 9/11 no less, ending a 58-game winning streak in international tournaments with NBA players on the roster.

Team USA was ousted from medal contention by France, 89-79, at the World Cup today, marking the first loss since losing to Greece in 2006 and sending its bid to become the first nation to win three consecutive World Cups up in smoke.

France was led by Evan Fournier, who scored 22 points, and Rudy Gobert (21 points and 16 rebounds). France trailed USA by seven points with eight minutes left in the fourth before Frenchman and New York Knicks guard Frank Ntilikina checked in. Ntilikina scored seven points to fuel France’s 17-point outscoring margin over that span. France had previously been 0-9 against the U.S. in major international play.

The hope was that Frank Ntilikina would walk away from this tournament with a boost of confidence… hard to imagine a scenario that would give him more confidence than making arguably the two biggest jumpers in French basketball history to beat Team USA pic.twitter.com/oLjsYyNYu3

Donovan Mitchell scored a game-high 29 for the Americans, but went cold in the fourth, scoring no points.

The very best the Americans can do now is finish fifth, facing their lowest finish in 17 years.

While the Americans didn’t have their best players on the roster (see: Joe Harris, Derrick White, and a Mason Plumlee), it didn’t make

Team USA after losing to France on 9/11 pic.twitter.com/ZaPclI0JaA

Team USA really got cooked and eliminated by Frank Ntilikina and Evan Fournier….our founding fathers are rolling over in their graves.

I laugh to keep me from crying.