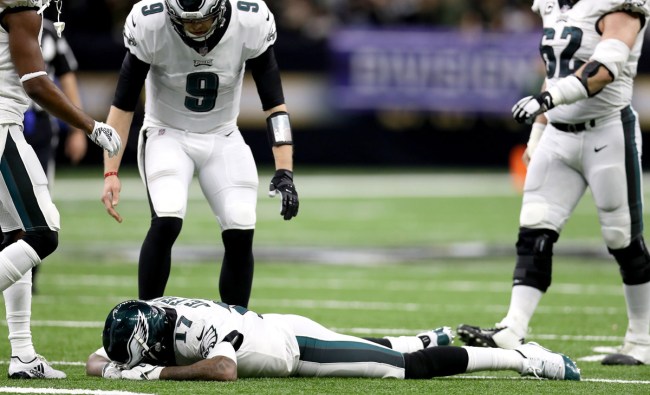 If you enjoyed seeing Alshon Jeffery drop that pass that sealed the win for the New Orleans Saints on Sunday, then this Tecmo Super Bowl version is for you.

If you are a Philadelphia Eagles fan, you might just want to find something else to watch. (And hey, I’m a Bears fan, so you can’t possibly feel worse than I do. Yes, the irony of Jeffrey being a former Bears wide receiver isn’t lost on me either.)

What makes it even worse is that earlier this season, Jeffrey said he has the “best hands in the league.”

Alshon Jeffery: “To the city of Philadelphia, that’s on me. I’ll take that.” pic.twitter.com/ngIwHdH3R0

Jeffrey also added, that just like the Bears players did with Cody Parkey, his teammates also had his back after the game, telling him, “…we wouldn’t be here if it weren’t for me, stuff like that. We wouldn’t have won the Super Bowl if it wasn’t for me last year. But that was last year. But hey, things like that happen. It happens to the best of us. You gotta move on. It hurts right now. But I guarantee we’ll be back next year for sure.”

So yeah, tough day for Alshon and the Iggles, but hey, at least we got this A++ Tecmo Super Bowl parody video out of it. And really, what more could you ask… as someone who doesn’t root for the Eagles?