Teddy Bridgewater (Yes, That One) Could Reportedly End Up Making $30 Million A YEAR When He Enters Free Agency 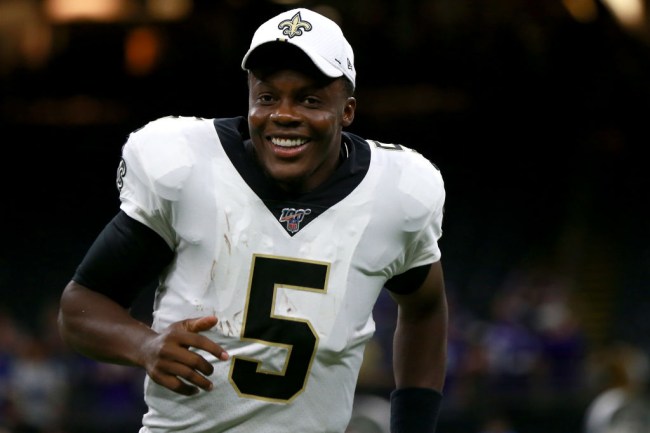 Teddy Bridgewater made enough of a name for himself during his time at Louisville to get picked up by the Minnesota Vikings with the last pick in the first round of the 2014 NFL Draft and quickly stumbled into a starting spot as the team’s quarterback after Matt Cassel was sidelined just a few games into the season.

Bridgewater had an incredibly impressive rookie year and showed that his first campaign wasn’t a fluke when he led the Vikings to the playoffs and was named to his first Pro Bowl the following season.

However, disaster struck shortly before 2016’s slate of games was set to kick off when Bridgewater suffered a devastating knee injury during practice that would ultimately keep him out of action for 15 months and he’d only play in one more game for the Vikings before he entered free agency in 2017.

Doctors had successfully rebuilt the quarterback’s knee, but when he recovered, Bridgewater was faced with the tall task of rebuilding his career after being out of action for more than a year. After taking a look at his options, he signed an incentive-laden contract with the Jets but never played a game for them, as he was traded to the Saints in 2018, which was probably a bit of a hard pill to swallow when you consider there was no shot he was going to start over Drew Brees.

However, Bridgewater got the chance to prove himself last year after Brees went down with a thumb injury that kept him out for five weeks in the middle of the season and he seized the opportunity by posting some solid numbers while winning every single game he played as a starter.

There was some speculation concerning whether or not the 41-year-old Brees was going to return for another season, but on Tuesday, he confirmed retirement isn’t in his immediate future.

As a result, it’s unlikely that Bridgewater—who became a free agent after the end of the season—is going to opt to spend another year waiting in the wings (it’s also doubtful Taysom Hill will be coming back to the team so the Saints have a little bit of work to do in the quarterback realm).

Bridgewater still has a fair amount to prove but it appears his performance last year was enough to get the attention of a few people around the league, as Jeremy Fowler recently revealed he’s heard rumblings that multiple teams could see the quarterback as their starter and Pro Football Talk says one of those teams could end up paying him upwards of $30 MILLION A YEAR?!?!?!?!

From NFL Live: Multiple teams expect Teddy Bridgewater to have a strong free agency market as a starting or bridge quarterback for a team in transition. Widely expected to be on the move unless Drew Brees retires.

I’m not trying to diss Bridgewater here, and after all the dude has been through, I’d be incredibly amped for him to get a chance to reboot his career and make bank while doing it.

With that said, there are currently only six guys in the league making $30 million or more in contract money on an annual basis. As Pro Football Talk notes, it’s likely the only way Bridgewater actually gets close to making that number is by meeting certain performance benchmarks, but still…$30 million?