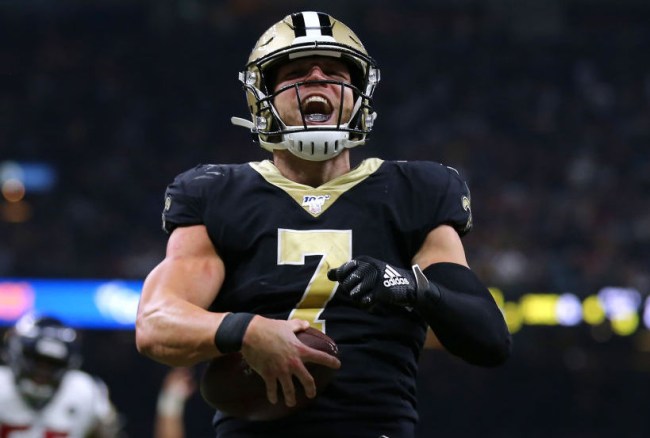 Plenty of people who get paid boatloads of money to talk about sports for a living despite regularly having objectively terrible opinions have been prophecizing the impending fall of Tom Brady over the past few years only to see the quarterback repeatedly make them eat their words thanks to his impressive ability to defy time.

Sure, the Patriots were unable to defend their championship after they failed to make it past the wild card round this year but it was hard to place much of the blame on Brady, who did everything in his power to overcome the relatively underwhelming offensive lineup he was given to work with.

The G.O.A.T. wasn’t shy about expressing his frustration over the course of his most recent campaign, and in October, we got our first real hint that all was not well in Foxborough when Adam Schefter caused production at the rumor mill to skyrocket when he said he believed Brady was preparing to explore other options after the final year of his contract came to an end.

Brady has all but ruled out retirement, and over the past month or so, there’s been a constant stream of fairly unsubstantiated and (often contradictory) reports concerning his future as the world overanalyzes his every move (and social media post).

Robert Kraft has appeared to resign himself to the reality that Brady will test the waters of free agency and the Patriots are already facing some stiff competition, as the Raiders are reportedly prepared to offer him $60 million over the course of two years.

As a result, New England has started to explore potential contingency plans if its franchise quarterback decides to take his talents elsewhere, and according to Sports Illustrated, one of the top contenders to take over is Saints quarterback/running back/receiver/kick returner Taysom Hill.

Hill went undrafted out of college but eventually ended up in New Orleans in 2017, and since then, the team has essentially used the all-around athlete however it’s seen fit.

However, as Total Pro Sports notes, Hill has made it clear he believes he has what it takes to be a franchise quarterback, and while it’s currently unclear if the 41-year-old Drew Brees will be returning next year, it seems unlikely Hill will stick around if he does.

Is targeting a guy who has completed six passes over his first three years in the NFL to replace Tom Brady a bold strategy? It certainly is, Cotton. I guess only time will tell if it pays off for them if this hypothetical scenario ends up coming to fruition.