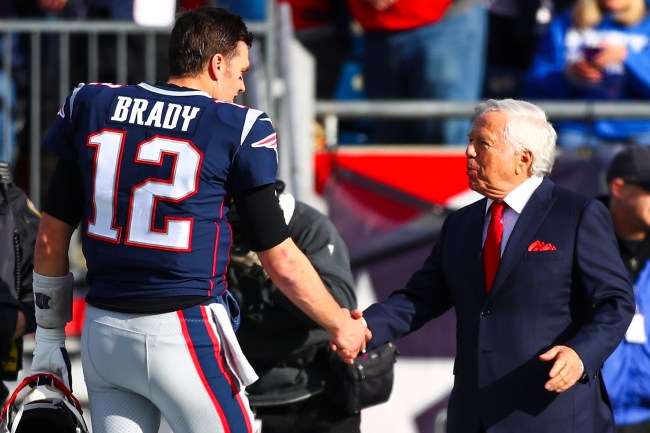 Tom Brady’s free agency is the hottest topic in the NFL offseason, with the six-time Super Bowl champ (and the definitive GOAT), being rumored to actually be considering options other than the New England Patriots. It’s absurd to think about No. 12 donning another uniform, yet, here we are, following along all the reports that surround his future in the league.

Whether it’s the Los Angeles Chargers presumed to be a realistic landing spot now that they’ve moved on from Philip Rivers, or some of the other wild rumors that have been reported in recent months, nobody knows for sure how the Tom Brady free agency saga will unfold. But, at the very least, New England owner Robert Kraft is at least hoping his franchise signal-caller goes through the process and talks to other teams.

No, seriously, that’s what Kraft reportedly said about Brady’s NFL future, with the owner hoping that the greatest ever actually gets into talking contract figures with other suitors before he negotiates with the Pats. Why? Simply put, because Kraft wants the quarterback to get a sense of how other teams value him right now, and, once a salary is tossed around, New England can then weigh the best option for them — to either get into a bidding war, or move on.

Take a look below at NFL Network’s Ian Rapoport talking about the topic.

From NFL Now: #Patriots owner Robert Kraft felt the best outcome for all parties in 2020 would come after Tom Brady tested free agency. An explanation for why he agreed to let it happen 👇🏼👇🏼👇🏼 pic.twitter.com/9UkM6aZp2w

With both sides familiar with one another, the hope from Kraft is that Brady and his representatives will act in kind when it comes to this whole process, being open about negotiations with other teams, while also being respectful of each other’s time. It’s a gamble, of course, but Kraft seems to know what he’s doing given his relationship with Tom Brady dating back to 2000.

It’s impossible to know how the Tom Brady free agency drama will unfold, but former quarterbacks who have been in a similar position — namely Brett Favre and Joe Namath — have both offered up some insight as to what they think No. 12 should do. With Brady 42 years old and hoping to play till he’s 45, it’ll be interesting to see what kind of cash he might get from either the Pats or elsewhere, and it’ll be really strange to actually see him move on from the most successful pro sports franchise in the past 20 years.