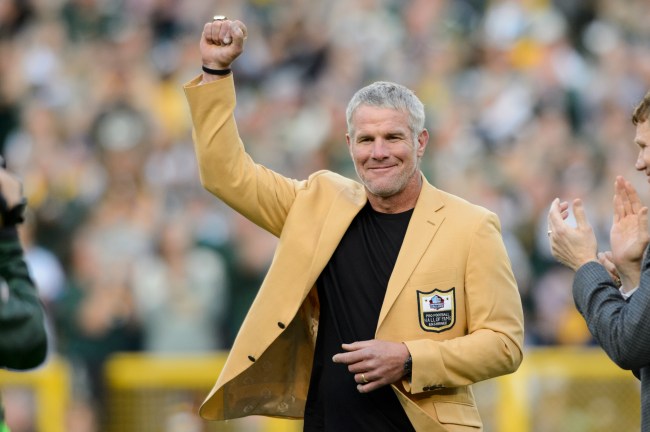 Brett Favre knows a thing or two about being a legendary quarterback for a single franchise and being pushed out. As all of us remember, that’s what happened to the now Hall of Fame signal-caller with the Green Bay Packers in 2008, when the franchise handed over the reins to Aaron Rodgers after a couple of years of dysfunction between the two egomaniac athletes — which sounded tense AF during its height.

Although it’s a little bit of a different situation with Tom Brady and the New England Patriots — since the Pats haven’t been grooming the GOAT’s predecessor for the past few years like the Packers did with Rodgers – Brett Favre still sees a few similarities. And, since being an NFL quarterback is like being in the ultimate fraternity, Favre reminded Brady that, regardless of how things might feel now, the 42-year-old still holds all the leverage when it comes to his NFL future.

Brady, who has openly said for years that he plans to play until he’s 45 years old, is coming off a season in which the Pats looked like a shell of themselves offensively. Sure, New England finished 12-4 during the regular season, but the way they lost to the Tennessee Titans at home in a Wild Card Game was pathetic. It didn’t help that Brady threw a game-sealing pick-six — which could potentially be his final pass with the Pats.

Rumors have swirled that Brady may be headed out of New England this offseason, and, regardless of what happens, Brett Favre wants No. 12 to know that he’s in total control of the situation. Just look at what the ol’ Gunslinger said about Brady’s situation his Sirius XM NFL Radio show.

“I think with Tom, he’s really in a great spot. If he wants to play, you know, I’m sure New England would take him back in a heartbeat and pay him whatever. And if he wants to go play somewhere else and just see, just test the waters and see what it is like to play for someone else, maybe lead another team to a championship, he has that right.

I see, really, little decline, if any, in his game. I think he certainly needs some help. And I don’t care who was quarterbacking that team, they would need a little help.

So he’s got to sit there and think: Do I want to play? Can I play? I think the question, ‘Can I play?’ can easily be answered. I think he can still play. And the question of if he goes to another team can they protect him and will the play calling be somewhat familiar with what he’s used to? Because that’s another element.

He’s been in the same offense for 20 years and to learn a foreign language overnight is pretty difficult to do, not to mention do you really want to go through that?”

Brett Favre brings up some solid points here, because, he’s right, Tom Brady does have control over the entire situation — as long as he’s still got the passion to still play. While (some insane) Pats fans are already burning Brady’s jersey after the recent playoff loss, most people in New England want the six-time Super Bowl champ to finish his career with the franchise. Add in the fact that Pats owner Robert Kraft is all but begging the quarterback to come back and, well, it’s on TB12 to decide if he wants a new challenge elsewhere, or if he wants to run it back again with the Pats.

Regardless of what Tom Brady decides to do, Brett Favre’s comments proves this is a unique opportunity, because it’s the first time in Brady’s career that he may feel disrespected by the Pats organization. And, if he’s looking for a way to re-energize his career for 2-3 more seasons to prove he can still play, this would be the time to bolt the only franchise he’s ever known to hand select the team he wants to chase another Super Bowl with to really stick it to those doubting him at his age. That’s so Brady-like, isn’t it, so we’ll have to see how this all plays out this offseason.