Robert Kraft Will Reportedly Not Force Bill Belichick To Keep Tom Brady, Nor Make The QB To Stay Under A Franchise Tag 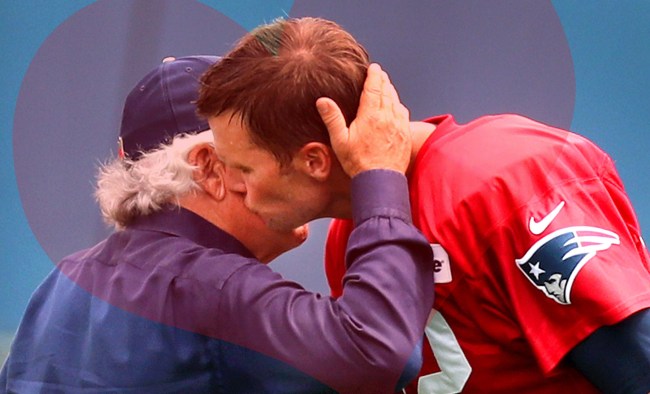 Despite their extremely close relationship after 20 years working together, New England Patriots owner Robert Kraft will reportedly not force head coach Bill Belichick to keep Tom Brady if he wants to move on from the future Hall of Fame quarterback.

Speculation that Kraft will utilize his veto power over any decision to part ways with Brady stems in large part to the long-held, repoertdly false, belief that Kraft forced Belichick to trade quarterback Jimmy Garoppolo in 2017 just as many began speculating that he would be taking over the reigns from Brady sooner rather than later.

According to Tom E. Curran of NBC Sports Boston…

The owner has declared many times he wants Brady to remain a Patriot. But my understanding is that, just as he wouldn’t force Brady to stay under a franchise tag, he won’t intercede if Belichick concludes moving on from Brady is the best course of action.

While Brady is more than open to remaining a Patriot if things seem destined to improve, the lure of being a free agent is there as well. There are about 10 teams – including the Patriots – that could be attractive landing spots or possible suitors.

Curran also states that it is his understanding that the Patriots will “extend themselves” financially in an effort to re-sign the face of the franchise.

Brady, who is reportedly “embarrassed” by the fact that he made a lower salary than quarterbacks Wilson, Roethlisberger, Rodgers, Goff, Wentz, Ryan, Cousins, Brissett, Garoppolo, Stafford, Carr, Brees, and Alex Smith in 2019, is expected to give the Patriots some sort of answer as to his intentions before free agency begins on March 18.

According to the latest, ever-changing odds, the Oakland Las Vegas Raiders and San Diego Los Angeles Chargers are still the favorites to land 42-year-old QB.