Tom Brady Reportedly ‘Embarrassed’ By His Salary, Says He Is ‘Open-Minded’ About Leaving New England 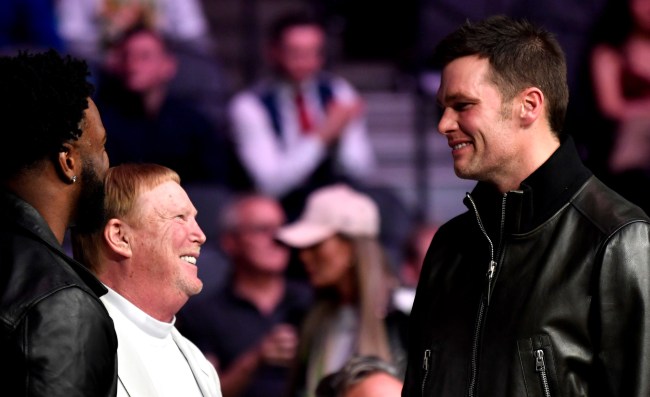 The Tom Brady free agency routlette wheel took another spin over the weekend.

The legendary Patriots quarterback was spotted at UFC 246 chatting with Raiders owner Mark Davis and hinted during his weekly interview with Westwood One’s Jim Gray that he is willing to go play for a team other than New England in 2020.

Because internet, Brady being seen in public talking to Davis and current Raider Marcel Reece at UFC 246 sparked all sorts of reaction.

Tom Brady and Mark Davis meet at Connor McGregor vs Cowboy Cerrone.. could Brady be a Las Vegas Raider next season? 🤔 pic.twitter.com/b3zGopQYuV

Just talked to Dana White after the press conference. He absolutely believes Tom Brady to the LV Raiders has legs. White is a longtime Pats fan who has a relationship with Brady and is a suiteholder at Allegiant Stadium. Also says Mark Davis is one of the nicest people in sports

I want someone to photoshop Mark Davis' hair on Tom Brady's head.

While we’re pretty sure Brady and Davis meeting up at UFC 246 was just a coincidence (or was it?), what Brady said during his interview with Jim Gray was very pointed.

“I’m open-minded about the process,” Brady said Sunday when asked if he would consider leaving the Patriots. “At the same time, I love playing football and I want to continue to play and do a great job. I’m looking forward to what’s ahead. Whatever the future may bring, I’ll embrace it with open arms.”

Brady can’t “officially” begin speaking to other NFL teams until free agency begins in March, but, yeah, he’s Tom Brady… who’s going to stop him from doing it early?

Also, according to Gary Tanguay on Arbella Early Edition last week, one of the main reasons Brady is looking for greener pastures is because he is “embarrassed” that he was making a lower average salary than 13 other NFL quarterbacks.

“I was told today by a source the family is planning to leave the area,” said Tanguay. “The priority this time is to let the kids finish school this year, then they’re gone.”

Stephen A. Smith said on Monday that the Tennessee Titans would be the perfect place for Brady, due in large part to former teammate Mike Vrabel being the head coach there.

Whatever happens, March 18 – the day NFL free agency begins – is a day worth marking on your calendar.