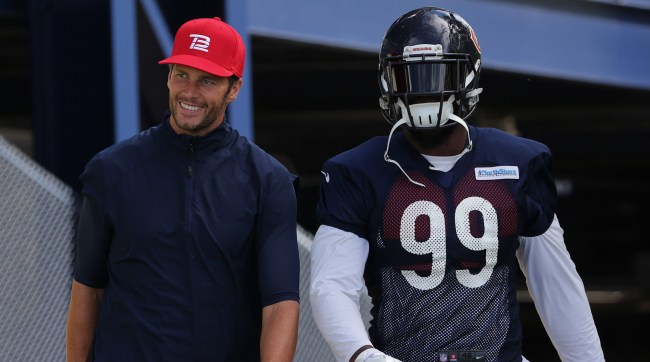 Joe Montana playing quarterback for the Kansas City Chiefs? No one saw that coming. Brett Favre under center for the Minnesota Vikings? No freaking way. But it happened. So, Tom Brady calling the signals for the Chicago Bears? It’s possible, says long-time Boston Globe columnist Dan Shaughnessy.

Brady has basically confirmed that he will be back for a 21st season in the NFL.

The question on everyone’s mind is, where will it be? Shaughnessy thinks it very well could be in Chicago.

“I think Tom would be agreeable to listening,” Shaughnessy told ESPN Chicago’s Kap and Company. “And I think if the Patriots don’t take care of business then those situations are good. The TB12 brand, he’s the best advertiser if he wants this to be a global entity, if he can show that he can play NFL quarterback at 45. That’s the promotional aspect of spreading the brand. If I were him, I would’ve retired last year. The confetti was falling on my head. Just won another Super Bowl. You’re 41. It would’ve been a perfect time to walk off. That hasn’t happened. Doesn’t feel like it’s gonna happen. Chicago’s as good as the Chargers or Dolphins. Maybe better.”

So then, David Kaplan asked, what if the Bears rolled up the Brinks truck and offered Brady $70 million guaranteed for two years, think he’d be interested?

“Yeah, if I’m the Bears I would do it,” replied Shaughnessy. “I would do that. Because he’s probably going to be still pretty good next year. And the P.R. hit and the interest in your team would be off the charts.”

“And you think he would listen?” Kaplan asked.

“Oh yeah,” replied Shaughnessy. “I believe he would listen to that. Absolutely.”

Would Tom Brady really be an upgrade over Mitchell Trubisky in 2020? That’s certainly debatable.

What isn’t debatable is that among the teams being thrown around as possible destinations for TB12 in 2020, the Browns, Chargers, Steelers, Cowboys, Panthers, Raiders, and Bears, only Chicago, Pittsburgh and Dallas were able to go .500 in 2019, but there’s no way Dak Prescott isn’t re-signed and unless Roethlisberger retires, the Steelers are out of the question, so…?

Other dark horses in the race for Brady are the Colts, Dolphins, and Titans, but no way he goes to the Dolphins and if Ryan Tannehill keeps rolling, the Titans are going to want to keep him. The Colts would almost be too good. Can you imagine Brady playing in the same city where Peyton Manning made his name? That would be insane.