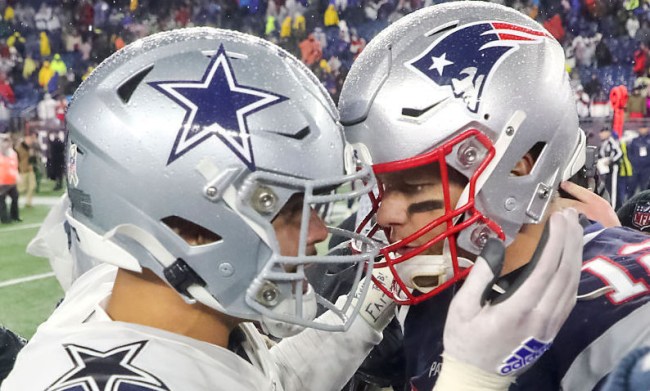 Last October, Adam Schefter decided to engage in a unique form of real estate speculation after possibly reading way too much into Tom Brady’s decision to put his house on the market and confidently stated the quarterback was laying the groundwork to prepare for a future that sees him taking his talents to another team.

Brady expectedly danced around the question when asked if there was any credence to the prediction but Schefter created a monster by unleashing the possibility into the public consciousness and giving sports radio hosts and talking heads on ESPN a topic to debate to death over the past few months.

The Patriots legend didn’t hide his frustration with his team’s performance in a season that ended with New England being forced to play during Wild Card Weekend for the first time in a decade that saw them earn a bye in all of the seasons before the most recent one.

Rumors started to fly virtually as soon as the final whistle blew in New England’s losing effort to the Titans and Brady failed to offer much insight into his next move aside from suggesting retirement isn’t on the table.  However, that hasn’t stopped people with literally zero knowledge of his current mindset from chiming in.

Now, we have another person with absolutely no insight into which direction Brady is leaning but who wants to make their opinion known anyway in the form of Terrell Owens, who spoke with 95.7 The Game to assert the 42-year-old will become the object of Jerry Jone’s desire if he opts to explore other options.

The former Cowboy explained why he believes Brady could be tapped to replace Dak Prescott as the man in the pocket in Dallas, saying:

“They have a quarterback that’s a free agent in Tom Brady. That’s the next move.

[Jones] hasn’t extended Dak’s contract. So, that leads me to believe he truly doesn’t believe in Dak. If he had, then I think he would have already got a contract extension.”

Prescott is in pursuit of a massive payday but reportedly hasn’t discussed specifics with the Cowboys since his camp informed the franchise of how much he feels he’s worth back in September. However, there’s little reason to believe Dallas would be offered the same discount Brady repeatedly gave to the Patriots and they’d likely have to end up finding a replacement in a couple of years, which wouldn’t be the case if they retain the 26-year-old who’s shown he more’s than capable at his position.

On Wednesday, Brady confirmed he’ll be returning next season in an ambiguously worded statement in which he announces he’ll “be in the area again” next season but doesn’t shed any light on if that arena will be Gillette Stadium or somewhere else.

Strap in, folks. The path ahead is going to be littered with hot takes that promise to make the coming journey a very bumpy ride.