The Browns Are A Mess, But One Gambling Site Thinks Tom Brady Joins Them This Offseason 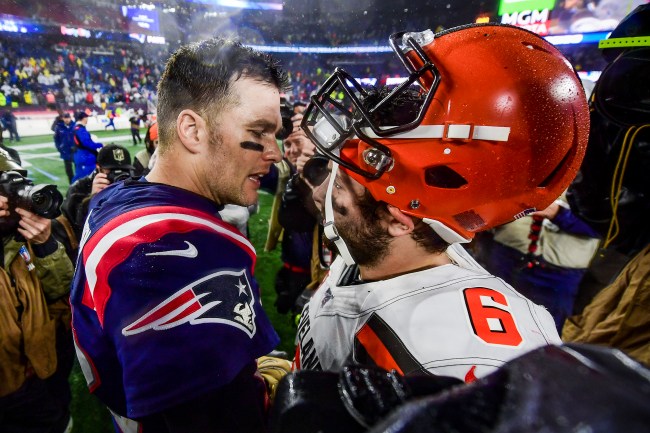 Tom Brady still has something to prove — as he openly referenced on a recent Instagram post proclaiming that he’s not quite done playing in the NFL just yet. But would the GOAT, who has won a record six Super Bowl titles, really take on a challenge that no other quarterback in the world would want: playing for the Cleveland Browns? According to one sports betting site, it could be a possibility.

Sure, there are Tom Brady rumors floating around all over the place, with many thinking that his time with the New England Patriots is all but over after a 20-year run that included nine Super Bowl trips and those six championships. But most people believe Brady would head towards warmer weather, with both the Miami Dolphins and the Los Angeles Chargers being the two teams most connected to the 42-year-old signal-caller should he bolt New England. But the Browns? Well, nobody would even fathom that as a possibility.

Well, nobody except one sports betting site called SportsBetting.ag, which actually lists the Browns as the favorites to land Tom Brady this offseason, with a surprising 11-2 odds (+550). Take a look at some of the Brady bets below.

Uh, do these people have some intel that nobody else does, because the Browns would seem like the furthest place a guy like Tom Brady would ever want to join — although, truth be told, he would become an even bigger legend if he led the dysfunctional franchise to a Super Bowl if he did play for them. To help get some clarity into all this, WKYC reached out to the folks over at SportsBetting.ag to see why the Brownies are the team with the best odds for Brady’s services this offseason.

“The Browns were initially installed as the favorites because we do believe Josh McDaniels will take a head coaching position this offseason, and the stars align well for him to head back to Ohio where he was born and raised,” the site’s lines manager, Robert Cooper, told 3News. “And what would make for a better story than McDaniels and Brady heading to the organization where Bill Belichick cut his teeth as a head coach? All the pieces of the puzzle are there for them offensively, and the defense isn’t too shabby either. They would immediately become legit contenders next season.”

This sounds like a Madden-like probability, but not something that could possibly happen in real life. After all, while the Browns would be complete morons to turn down Tom Brady should he show interest in playing for the beleaguered franchise, what does that say to former No. 1 overall pick Baker Mayfield, who would either become expendable or forced to ride the pin behind Brady for the next couple years? Yeah, that won’t divide the locker room at all…

Who knows what the future holds for Tom Brady, but with the Browns currently the only team in the league without a head coach — even though they’re connected to current Pats offensive coordinator Josh McDaniels, who they’re interviewing in the next couple days — as well as a history of complete incompetency, it seems like a far-fetched scenario that the GOAT leaves the best organization in sports for (arguably) the worst. Hey, stranger things have happened, though, we did see Michael Jordan play for the F’in Washington Wizards once before.