The Greatest Mullet In Football Is No More, Teddy Gallagher Shaves ‘Chanticleer Chandelier’ For Charity 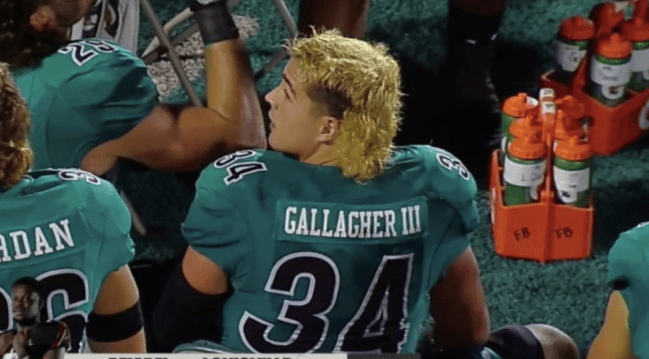 Nobody has had more fun on a football field over the last two seasons than the Coastal Carolina Chanticleers. At the forefront of the team’s persona and swagger was super senior linebacker Teddy Gallagher.

Over the past two seasons, Coastal Carolina has gone 22-3 and won its first bowl game in program history last week. While they were winning on the field, the Chants were celebrating in style.

Their sideline cloak and sword is the best turnover prop in college football, they acted out elaborate wrestling stunts against their opponent’s mascot, challenged Joey Chestnut to a pizza-eating contest, and even decapitated a wolf. Kind of.

In the middle of all of the raucous and dominance was Gallagher. He was hard to miss.

The 6-foot-1, 230-pound hard-hitter rocked a bleached-blonde mullet during the 2020 and 2021 seasons, which ESPN’s Marty McGee donned the ‘Chanticleer Chandelier.’ It was glorious.

When it comes to mullets, it doesn't get any better than @teddyjgallagher's.

However, it is no more. When Coastal’s season came to a close last week, as did Gallagher’s career in Myrtle Beach.

On Thursday, Gallagher cut his famous mullet. He will auction off the blonde locks and the proceeds will be donated to The Dylan Adams Endowment, which helps children and families affected by pediatric cancer.

Looks like the finest hair in Conway is no more! But don’t worry Chant fans! It’s all for a good cause as @teddyjgallagher’s famous mullet, dubbed the “Chanticleer Chandelier” by @MartySmithESPN, is being auctioned off and the proceeds going to @Endowment99 pic.twitter.com/ROgbU78tys

May the Chanticleer Chandelier forever rest in peace.

RIP to the Chanticleer Chandelier.

Who is that dude? pic.twitter.com/tkE0tQ6LtC

Gallagher spoke about his decision to cut the mullet and auction it off, and it means a lot to him. His father is a cancer survivor, so being able to give back is something that he is very excited to be able to do.

As the son of a cancer survivor, this was a special moment for @CoastalFootball LB @teddyjgallagher.

His golden locks will be given to the Dylan Adams Endowment (@Endowment99) to be auctioned off with the money going towards cancer research.@wmbfnews #ChantsUp pic.twitter.com/31w3vGQIBf

Gallagher finished his four-year career with 302 total tackles and a sweet mullet. Although it is no longer, the Chanticleer Chandelier is forever intrenched in college football history and will be serving a great cause in its absence.