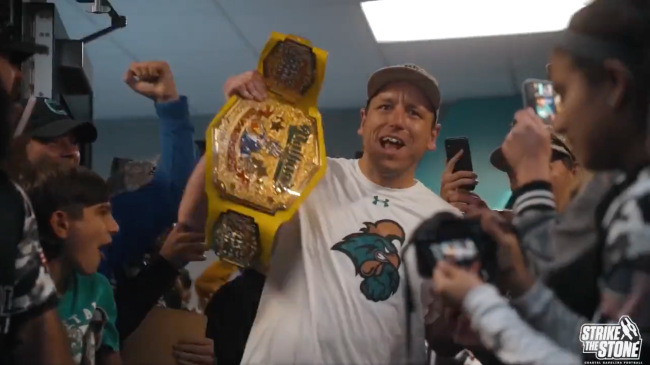 Coastal Carolina football is never not having fun. The Chanticleers won their ninth game of the season on Saturday afternoon and celebrated in epic fashion.

After beating Texas State by two scores, the team gathered in the locker room for a pizza-eating contest. Dressed as Major League Eating champion George Shea, who you might know as the guy in the hat during the Nathan’s Hot Dog Eating Contest, one of the team’s assistant coaches announced the competitors.

Punter Charles Ouverson, offensive lineman Trey Carter and linebacker Silas Kelly were selected from the team. Joining them, however, was an outsider.

To round out the competition, none other than Joey “Jaws” Chestnut was introduced. He entered with one of his Hot Dog championship belts over his shoulder and the locker room went wild.

And then it was time to eat. Each competitor lined up in front of a personal pizza and plenty of water. Chestnut dominated.

Despite his competitor’s inexperience, Chestnut did not hold back. As each of the Chanticleers struggled to eat the slices one by one, the 37-year-old stuffed two slices in his mouth at a time.

It was not even close, but it was electric.

After the celebratory eating contest pitting his team against a legend, Coastal head coach Jamey Chadwell spoke with Myrtlebeachonline.

“You couldn’t have combined our other three guys and eaten what he did in two minutes,” Chadwell said. “It was pretty sweet though.”

As did Chestnut. He said that linebacker Silas Kelly, who was directly to his right, put the pressure on as best he could.

“Kelly, that guy’s an eater. He’s definitely the best eater on the team but I still put him down,” Chestnut said. “I almost finished the whole pizza, but it had been sitting out a little bit and the crust was a little rough.”

This is not the first time that Coastal has celebrated in epic fashion. They are known for their elaborate postgame ceremonies and, earlier this year, the Chants decapitated a stuffed wolf after beating Arkansas State.