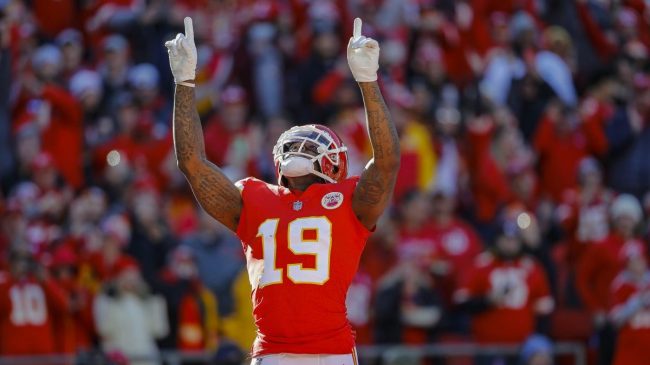 The Tennessee Titans have to replace a significant amount of production at the wide receiver position in 2022. The reigning AFC South champions traded Pro Bowl wide receiver AJ Brown to the Philadelphia Eagles in the offseason.

The Titans then drafted Arkansas wide receiver Treylon Burks with the No. 18 overall pick in the 2022 NFL Draft in an attempt to find a Brown replace. By all accounts, Burks has exceeded expectations early on.  But he’s also dealt with injuries on and off throughout the preseason.

Now Tennessee appears to be looking at other options in the passing game.

The Titans made a move for a big name on Thursday morning when they inked for first-team All-Pro Josh Gordon to a practice squad contract.

Titans are signing former Chiefs’ WR Josh Gordon to their practice, per his agent @zachiller of @LAASportsEnt, who said, “The comeback continues.”

Gordon played for the Kansas City Chiefs in 2021, playing in 12 games and starting seven. But his production was limited. The former star caught just five balls for 32 yards and three touchdowns.

As a 22-year-old in 2013, Gordon took the NFL by storm with the Cleveland Browns. He caught 87 balls for 1,646 yards and nine touchdowns to make his first and only Pro Bowl.

But many will remember the wideout for his issues off the field.

Gordon was kicked off the team at Baylor University for a number of drug violations. He then transferred to Utah but didn’t play a down for a Utes.

The Cleveland Browns selected him in the second round of the 2012 NFL Supplemental Draft and signed him to a four-year, $5.3 million deal.

Gordon stars as a rookie for the Browns, but is eventually suspended in June of 2013 for violating the league’s substance abuse policy.

After returning from suspension, he developed into one of the league’s premier receivers and earned All-Pro status. Unfortunately, that’s when things began to fall apart.

Gordon is suspended again in August of 2014 and misses 10 games in the subsequent season. In February of 2015, he’s suspended for an entire season by the NFL. He has his petition for reinstatement by the league denied in 2016 due to another failed drug test.

Eventually, Gordon finds his way back into the league before being traded to the New England Patriots. His Patriots career lasts less than a year before stepping away from football in December of 2018.

Gordon spent time with the Seahawks in 2020 and 2021 before ending up in Kansas City. The 31-year-old now heads to Tennessee with a lot to prove. Titans fans will hope he can do just that.