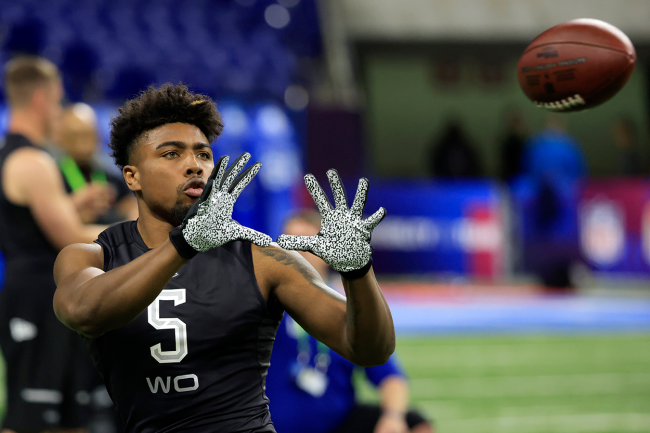 After the Titans traded A.J. Brown to Philadelphia, the team drafted Treylon Burks out of Arkansas to presumably fill the void. Both receivers play with similar speed and physicality and they have drawn a lot of comparisons to one another.

However, Burks’ first few practices in Tennessee did not go well. The 22-year-old struggled to get through minicamp as he dealt with the heat of summer, conditioning concerns, and asthma.

It was the perfect storm and head coach Mike Vrabel offered a unique perspective on rookies after Burks he was forced to sit out his first practice on the NFL level. As a result, Vrabel held his rookies in Nashville for a few days longer than planned in an effort to get them up to speed.

By all accounts, Burks is getting things figured out. He is up to speed in terms of conditioning and is able to be a full participant in practices.

In fact, he is starting to turn some heads already. One of his reps from over the weekend was downright nasty.

Lined up against defensive back Roger McCreary, who is no schlub, Burks went about seven yards on a go route, before planting hard on his left foot and cutting back to the inside. As he did, McCreary got all tangled up, couldn’t recover and went flying to the turf.

With his cover man on the ground, Burks caught the pass and turned back up field to finish the drill. It was a major win for the first rounder.