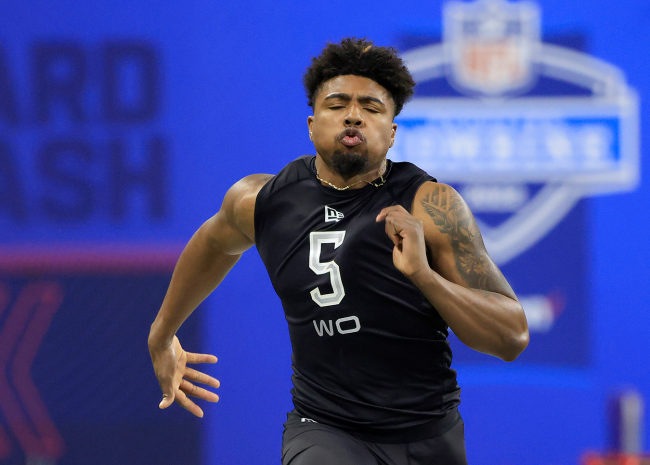 One of, if not the biggest story of the NFL Draft involved the Titans. The team decided to trade A.J. Brown to Philadelphia and drafted his replacement in the first round.

In an effort to find an immediate plug-and-play receiver who could fill in for Brown in Week 1, Tennessee drafted Arkansas wide receiver Treylon Burks with the No. 18 overall pick. The 22-year-old rookie has received comparisons to Brown in the past and the organization is excited about what he could become.

However, it appears as though it is going to take some time. Burks doesn’t sound ready to take over the WR1 role right away. According to reports out of minicamp, OTAs and training camp, Burks is slated to be the third wide receiver on the depth chart when the Titans open their season against the Giants in September.

Now, it is unclear as to why exactly Treylon Burks has yet to get things figured out on the next level early on. But his conditioning, and an underlying health condition, likely play a role.

Burks had to exit his first NFL practice in the Nashville heat early and head coach Mike Vrabel offered a unique, honest perspective on rookies. He was struggling to breathe properly and was overheating.

According to the most recent report on his status, Burks has asthma. He has to use an inhaler and has struggled to get acclimated to record-high heat in Music City.

“It’s unfortunate,” Titans wide receiver coach Rob Moore said. “Some of the things he’s dealing with are out of his control. The kid has asthma.”

As a result, he has been held out of various drills and certain practices. He missed both days of minicamp and was limited to conditioning work on a stationary bike.

The report also notes that “Burks clearly isn’t in top shape.” And Burks doesn’t appear to be the only one in that boat.

Per ESPN’s Turron Davenport, Vrabel made an announcement earlier this week. The team plans to keep rookies, including Burks, in Nashville while the rest of the team breaks. It will be a brief extended period to “get some heat that these guys can train in and they can lift and run, and get them caught up a little bit.”

Burks has plenty of time to get things right. And Nashville is insanely hot at the present moment, so it’s hard to point fingers at someone with asthma as being out of shape.

But with that being said, it sounds like the team is putting extra emphasis on getting him to where he needs to be.