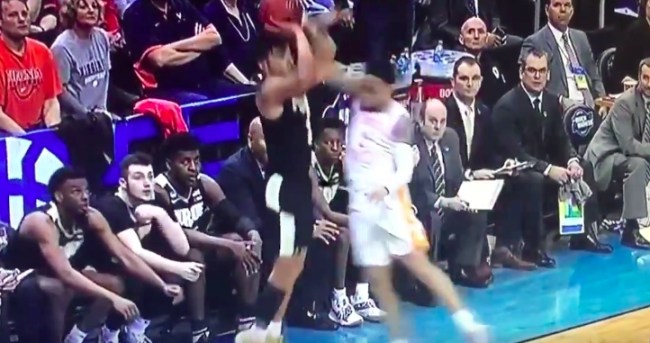 Purdue’s 99-94 overtime win over second-seeded Tennessee in the Sweet 16 was by far the most exhilarating game of the tournament. The Volunteers erased an 18-point deficit in the second half to tie the game at 65 just inside the seven-minute mark, but thanks to a questionable call and Rick Barnes’ mind-boggling clock management down the stretch, the Boilermakers were able to secure their first Elite Eight appearance since 2000.

A lot has been said about the polarizing call in the waning seconds of the second half that allowed Purdue to extend its season into overtime, where they would eventually secure the win. Purdue was trialing by two points with the ball and a couple seconds left when they inbounded it to star guard Carsen Edwards, who with his 29 points became the first player with 4 straight 25-point games in the NCAA Tournament since Stephen Curry had 5 straight games in 2007-08.

In any event, Edwards elevated for a corner three that was maybe-maybe-not affected by the hip of a contesting Volunteers player. It’s one of those calls that each side could make a valid argument for, but Tennessee fans weren’t feeling it.

This call is a disgrace. pic.twitter.com/DxhUogu7RY

Wow. Trump commented on the end of the Tennessee-Purdue game. pic.twitter.com/cJRNlDNOGy

Thanks to the new PI review rules, this “foul” call with 1.7 seconds left would be overturned in the NFL pic.twitter.com/NU6Jz8Gb2W

How's this not a 5 second violation? The cheating ref wasn't even counting & that wasn't even close to a foul. #Tennessee #Purdue #MarchMadness @notthefakeSVP #Rigged That dude with the perfect #Bracket is getting screwed. #Vols pic.twitter.com/yWEcRLbJ9x

I guess what goes around comes around…

#purdue #TennesseePurdue #tennesseebasketball #TennVsPurdue To anyone complaining about that last couple seconds. Only reason Tennessee was in it was this 4th “foul” on Cline. pic.twitter.com/ucke7Ls3x9

Actually, I think the refs suck entirely, so no one was given an edge.

Can Tennessee challenge this “foul?” pic.twitter.com/mbkITuZMHt