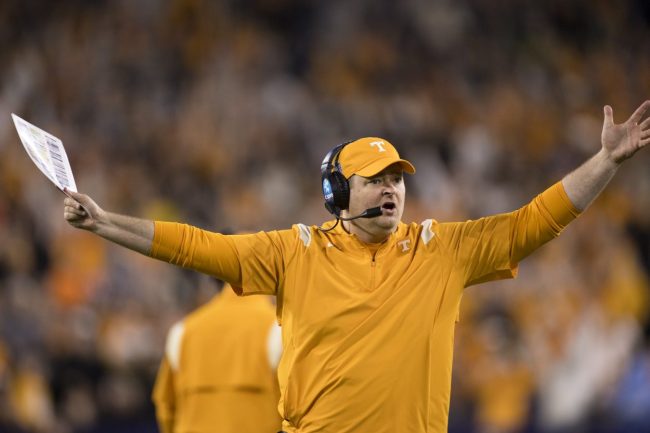 The University of Tennessee athletic departement was caught cheating once again and self-reported three infractions during the second half of 2021. This time, however, they are very minor, completely petty and totally ridiculous.

The Volunteers are currently under an NCAA investigation for Level I and Level II infractions that allegedly occurred under former head coach Jeremy Pruitt. Among the accusations, boosters were said to be giving recruits McDonald’s bags that were full of cash during their visits to campus.

That alleged infraction is not just hilarious, but very serious in nature.

The reported violations in 2021, according to a university document obtained by Knox News, are not serious in nature. In fact, they are downright ludicrous.

Here is a breakdown:

Tennessee was hosting a home game against Ole Miss and had recruits on campus.

Those recruits were supposed to watch the ‘Vol Walk,’ where players and coaches make their way through a crowd to the stadium, from a parking lot that overlooks the route. Because of the sheer size of the crowd, that did not happen.

After getting stuck at the top of the Vol Walk, the assistant director of recruiting decided to get the recruits to the stadium as quickly as possible. To do so, he brought them down the Vol Walk toward the stadium.

As a result, the recruits participated in a preview of the Vol Walk before the team did the real thing, which created an “impermissible gameday simulation.” The school said to the NCAA that mitigating circumstances caused the violation and that the recruiting staff was new and didn’t know contingency plans.

Tennessee self-imposed sanctions. They put their staff through training, reduced recruiting contact opportunities by one, and designed new routes around the Vol Walk so it would not happen again.

The SEC also implemented a further, minor ruling. Tennessee could not have in-person, off-campus contact with the involved recruits for 14 days and the assistant director of recruiting was suspended from recruiting activities for two days.

The second violation occurred in June.

A men’s basketball recruit was on an official visit. He dressed in a Vols uniform, walked onto the court with a basketball and took photos.

That is very standard for official visits.

However, this shoot was done on the basketball court. That is not a problem.

The violation occurred when he dribbled. It became a “display of athletic activities” and a “gameday simulation.”

But, because he dribbled on the court in uniform, it was a violation.

Tennessee once again imposed similar violations as the football program. Neither the SEC nor the NCAA administered any further penalties.

The third violation came over the summer.

The assistant director did not know that the action constituted an infraction. The posts were removed and Tennessee held training on the rule that was violated.

Neither the SEC or NCAA administered any further penalties.

Obviously, none of the three violations are a big deal.

And things like this occur more often than one might thing. Minor violations pop up throughout the calendar year at programs around the country, the schools recognize and report them, and the self-imposed sanctions are usually minor, insignificant, and sufficient in the eyes of the SEC and NCAA.

Brennon Champman spent eight years at Ole Miss as a part of the recruiting team. He recently shared two instances of minor violations during his time with the Rebels.

I got another because we paid for a recruits step-dad to come on a visit. His mom referred to her as her husband, the kid referred to him as his dad. The NCAA found that they had lived together for 10+ years but had never actually gotten married. Therefore, violation @38Godfrey

Needless to say, the NCAA is simply outlandish in most things that they do. In many, if not most instances, they overreach, overstep and cause more problems than they create.

These Tennessee violations are the perfect example. The Vols stay cheating, but not always on purpose or for any reason that actually matters.